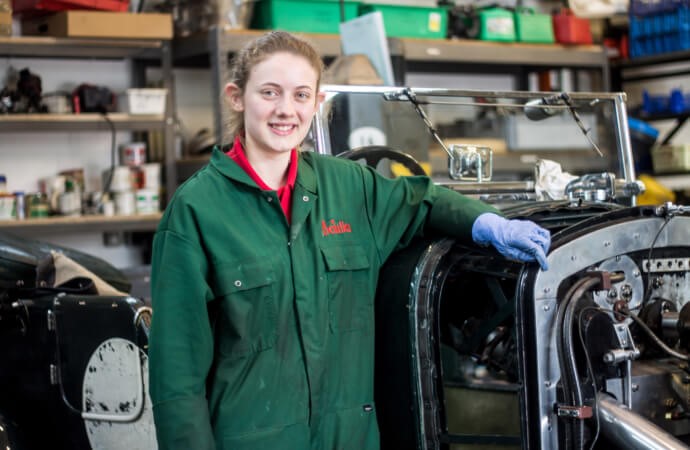 Beaulieu, UK – Forty years ago, Doug Hill, now manager and chief engineer of the National Motor Museum in England, was the last graduate of the museum’s apprentice program. To keep alive the skills needed to preserve the museum’s 250-vehicle car collection, he’s relaunched the program — and its first apprentice is 18-year-old Emily Leese.

She had been a museum volunteer since she was 14. She has spent the last two years studying engineering at Sparsholt College. In addition to training with the five-person staff in the museum’s workshop, she will spend time with Rolls-Royce and Bentley specialist P&A Wood, working on Level 2 and 3 diplomas in classic vehicle restoration.

“I think I fit in quite well so far and all the guys have been really good,” Emily said in the museum’s news release. “I definitely feel like part of the team. 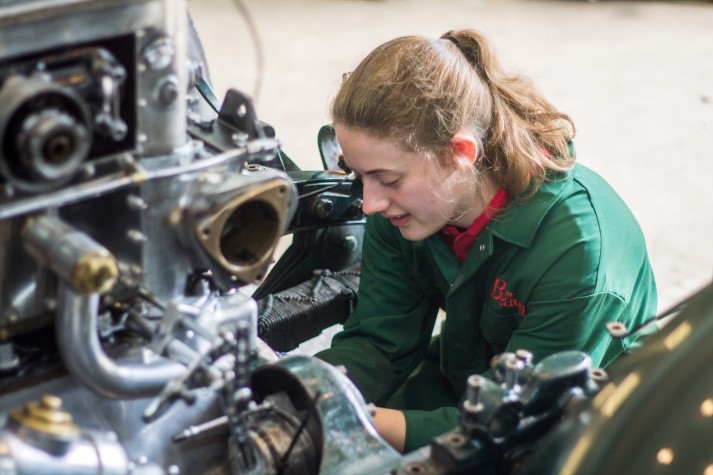 “I get involved in whatever projects are being worked on, from cleaning and polishing to putting things back together. Recently, I helped to re-fit the engine to our 1930 ‘Blower’ Bentley.

“I don’t know why I love cars so much, but I have ever since I was about 3 years old. Fixing things is my passion. I was always playing with toy cars when I was a child and wanted to be an AA (British equivalent of Triple A) lady! Even then, I decided that I wanted to have the knowledge to fix a broken-down car.”

The Beaulieu apprentice program is overseen by the Heritage Skills Academy and its engineering apprenticeships program, with funding from Beaulieu One Hundred group members, the Federation of British Historic Vehicle Clubs and others, including the Worshipful Company of Coachbuilders and Coach Harness Makers of London, and with equipment donated by Draper Tools.