LAKEVILLE, Conn. – Since 1983, Lime Rock Park has held its annual celebration of historic motoring significance by combining authentic-car vintage racing with a prestigious Concours d’Elegance. It’s an event unique to North America in that the racing and the concours are all on one property during one major vintage and historic event.

In the past decade the Historic Festival has added a 17-mile race car parade-and-rally over local roads and through three town centers, ending in a community street fair in nearby Falls Village, as well as creating a 1,000-car Gathering of the Marques car show that’s held concomitant with the concours.

“As a vintage automobile racer, concours participant, concours judge and enthusiastic sports car fan, I have watched the growth of Lime Rock’s wonderful Historic Festival,” said Arlan Ettinger, Guernsey’s president. “It is our hope that the auction helps to make this terrific event even better.”

Festival Chairman Murray Smith has also confirmed a number of other elements for this year’s Historic Festival 34:

► The Festival welcomes a presenting sponsor, the Prestige Family of Fine Cars, the leading vehicle dealer network in the Tri-State Region with more than 50 years of service to the car-buying public in New York, New Jersey and Connecticut. The dealer group retails a number of marques including BMW, Jaguar, Lamborghini, Land Rover, Lexus, Lincoln, Mercedes-Benz, Mini, Scion, Toyota and Volkswagen, out of Wappinger’s Falls and Middletown, N.Y.; Paramus, Mahwah and Ramsey, N.J.; and Stamford, Conn.

► Historic Festival 34’s Honored Guests are the dynamic duo of John Morton and Pete Brock. Among Brock’s numerous accomplishments is, of course, his designing the Daytona Cobra Coupe and founding his wildly successful Brock Racing Enterprises (BRE)… for which Morton was asked to drive and together, they won prodigiously between 1969 and 1972 in BRE Datsun’s in C-Production and 2.5-liter Trans-Am. Morton will race a BRE Datsun 240Z over the weekend, too

► Another of this year’s nine race groups are the wildly popular cars from the Historic Trans-Am organization; authentic pony cars that raced in Trans-Am in the iconic 1966 – 1972 period

► Along with the expected 250+ entrants in the Sunday in the Park Concours d’Elegance will be one of the six Duesenbergs (to be announced soon) that have won Pebble Beach’s Best of Show since 1969. 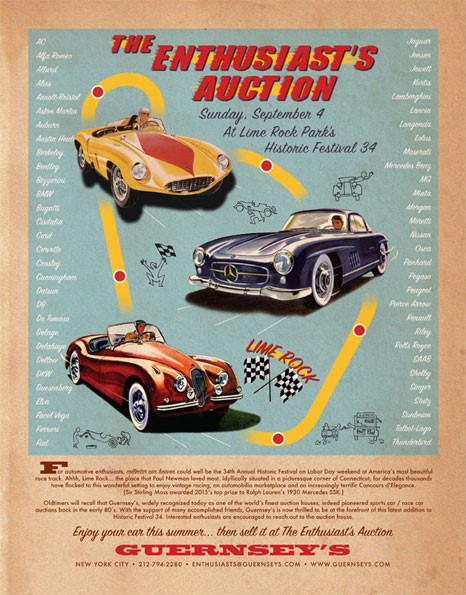