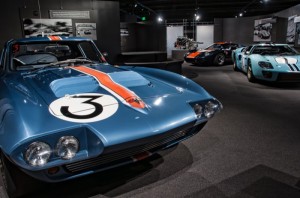 All photos courtesy The Revs Institute.

Naples, FL, March 25, 2014 – The REVS Institute for Automotive Research, Inc., featuring The Collier Collection of over 100 automobiles built between 1896 and 1995, the ones that blazed technical pathways, redefined aesthetic standards, made history, and changed the world, opened its doors to the public on March 25th.

Since the Collier Automotive Museum was closed in 1994, the Collier Collection was carefully enlarged, many of the automobiles were conserved with cutting edge techniques developed at the Institute, the galleries were reinstalled with extensive interpretive materials to better reflect the mission, and the archive and research library were subject to major expansion and development. Over time, with its extensive library, outstanding periodical collections that date from the 1890’s and vast photograph and manuscript collections on all things automotive, the Naples, Florida automotive research institute has become a major resource for historians, researchers, writers and academics. National and international interest of The Revs Institute’s programs, resources and renowned motorcar collection has led to the opening of the Collection to visitors.

With very few and deliberate exceptions, all of the Institute’s cars are operable and many travel around the country for vintage races and concours exhibitions. Porsche, Automobility and Vitesse exhibitions occupy the main floor and significant racing cars are shown on the second floor.

From the Porsche: Designed to Excel exhibit.

The REVS Institute holds probably the finest collection of rare Porsche road cars and racecars outside of Zuffenhausen. Of special note is the first racecar Porsche developed: the 1953 550-01 Coupe, which predictably won its first race. Also featured is the Le Mans-winning 917K fielded by Martini Racing in 1971 with driver Helmut Marko, among others. Briggs Cunningham’s personal 356 coupe, which he drove while a student at Yale University and appropriately painted dark blue, is also on display.

REVS’ history of the first century of the automobile begins with an 1884 Pope Columbia tricycle, which features innovations such as a differential that appeared in later cars. Early touring cars are represented by a Brass Era Model T and a Rolls-Royce Silver Ghost. Gary Cooper’s stunning 1932 Duesenberg SSJ stands out among the luxury cars, and VW Bug, Mini, 2CV and Trabant round out the “People’s Cars.” 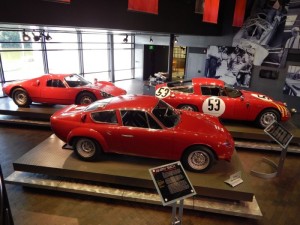 Red sports cars—an Abarth Simca, a Porsche 904 and an Alfa Romeo Guilia TZ—enliven the main lobby. An early Mercer Runabout, a Mercedes SSK roadster, a Hispano-Suiza skiff-bodied car with an open chassis beside it, a Stutz speedster, an MG K-3 Magnette and a brace of rare Bentleys are sported in the Vitesse Gallery. Cunningham’s racecars occupy their own gallery with the 1950 Cadillacs fielded at Le Mans, the famed “Le Monstre” aluminum-bodied car, a C-3 Vignale-bodied coupe, the C-4R and C-4RK, the famous O.S.C.A. that won Sebring and the “birdcage” Maserati. A freshly restored Scarab racecar which won Best in Show Concours de Sport at Amelia Island last month and a pair of Ford GT-40s are accompanied by the ultra-rare Corvette Grand Sport coupe, which, one of only five built, won its class at the Monterey Historics last year along with the prestigious John Fitch Excellence Award. 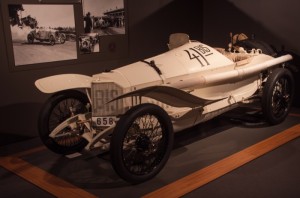 A 1914 Mercedes, one of the three surviving cars that gave Mercedes a one-two-three sweep of the French Grand Prix just prior to the outbreak of WWI, kicks off the Museum’s gallery devoted to the history of the racecar. A 1913 Peugeot 3-liter that raced at Indy, a “barn find” Bugatti Type 35-S, and a Delage grand prix car are in good company with such Formula One powerhouses as a front-engined Vanwall, a 1963 BRM world championship winner, the first rear-engined Type 43 Cooper that won its first race in Argentina and Dan Gurney’s Eagle Westlake, the only American car to win a Formula One event. The gem of the collection is a 1939 Mercedes W154 grand prix car, the only operable example of the eight extant. Many the car engines are displayed independently to demonstrate the technological developments over time.

Welcoming guests to the museum’s reopening, Scott George, vice president of The Revs Institute for Automotive Research, said “There has been an ever-increasing number of requests for tours of the automobile collection, and we will now be able to accommodate those eager to learn more about the cars we hold in our Naples facility.”

“We hope that increased access to The Revs Institute’s collections will further enhance people’s understanding of the automobile as one of the most significant creations of the 20th Century,” George added.

The Revs Institute will be open each week on Tuesday, Thursday and Saturday from 10:00 AM to 4:00 PM. Tickets must be purchased in advance and can be reserved both online and via phone. The rarity and significance of the cars is underscored by thoughtfully laid out exhibits and didactic plaques beside each car. The cars are not roped off, providing easy visitor access. Knowledgeable and enthusiastic docents in each gallery answer questions about the cars, enhancing the visitor experience. The Institute is compiling a guidebook to complement the viewing experience. The REVS Institute is a “must see” for any car enthusiast and well worth the visit to southwest Florida. For more information please visit http://www.revsinstitute.org or call (239) 687-REVS.