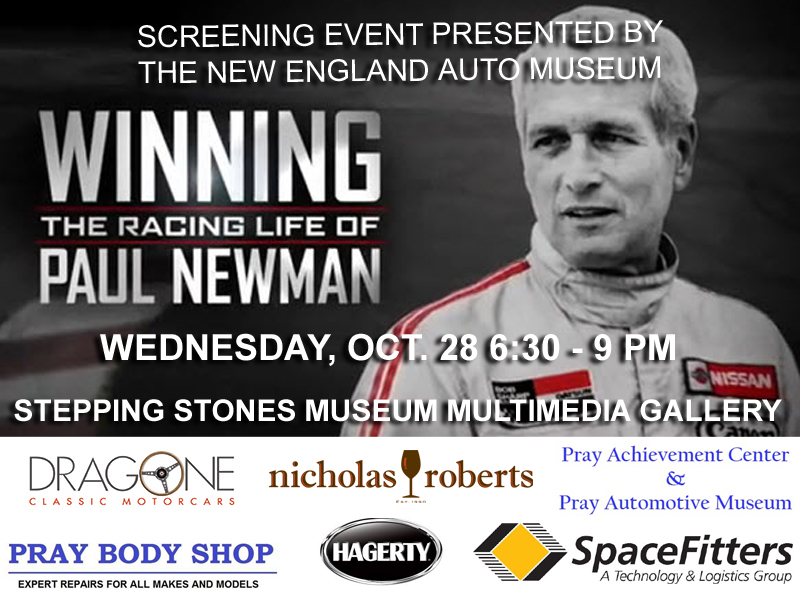 On Wednesday, October 28th at 6:30 PM, the New England Auto Museum will host a special one-night screening of the acclaimed documentary Winning: The Racing Life of Paul Newman at the Stepping Stones Multi-Media Gallery at Mathews Park in Norwalk. The event will raise funds for the non-profit New England Auto Museum, a 501(c)(3) organization dedicated to providing a permanent facility for display and education in automotive arts and technology.

“Paul Newman had a special association with Connecticut,” according to NEAM President Mike Scheidel, “as one of the most prolific and revered actors in American Cinema, as well as through his philanthropy with Newman’s Own and the Hole-in-the-Wall Camps, but what is not so well known is his passionate love for auto racing which became a focus of his life for 35 years.”

That passion is well on display in the documentary, co-produced by Adam Corolla and Nate Adams which recounts how Newman became bit by the racing bug when he starred in the 1969 film “Winning”at the age of forty-seven and continued until shortly before his death at age eighty-three in 2008.

Providing commentary and Q&A after the film, which is 83 minutes in length, will be Sherman, Conn. resident and Paul Newman’s long-term racing partner Bob Sharp. Newman drove for Bob Sharp Racing for many years, winning the Sports Car Club of America National Championship four times. Bob Sharp is among the many friends and fellow competitors interviewed in the film. Others include Robert Redford, who became one of Newman’s closest friends, his “Winning” co-star Robert Wagner; Jay Leno, no small car enthusiast himself; racers Mario Andretti and Patrick Dempsey, and Pixar founding member John Lasseter, who directed the actor in his final film role, voicing the tailor-made character of Doc Hudson in the animated film “Cars.”

In its review, the Hollywood Reporter lauded the film, describing the “archival footage of Newman racing and interacting with his fellow drivers as revelatory, with the actor’s determined efforts to be just one of the guys on ample display. One of the film’s most affecting moments is a haunting shot of the actor sitting mournfully in his car immediately after the death of his teammate Jim Fitzgerald during a 1987 race. As passionate about its subject as the actor was about driving, Winning: The Racing Life of Paul Newman provides a fascinating footnote to his distinguished cinematic career.”

The special one-night showing of “Winning: The Racing Life of Paul Newman” will take place Wednesday, October 28th from 6:30 to 9:30 PM.  Beverages provided by Nicholas Roberts Fine Wines of Darien and hors d’oeuvres will be served in the hour before the show. There will also be classic cars on display in the courtyard courtesy of Dragone Classic Motorcars, one of the event’s sponsors. Location will be the Stepping Stones Museum Multi-Media Gallery at 303 West Avenue in Norwalk (Mathews Park). Other sponsors of the event include Hagerty Insurance, Pray Auto Body, Pray Achievement Center & Pray Auto Museum and Spacefitters Logistics & Technology Group. Tickets will be $25 per person and space is limited to 150 attendees. Tickets can be purchased atwww.neautomuseum.org