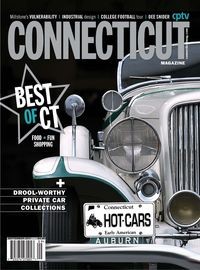 New Haven, Conn. – In its September issue, Connecticut Magazine visited six automobile collectors across Connecticut, a state where the nation’s most exquisite automobiles hide beneath its top-notch restaurants and museums. Cars are part of Connecticut culture, yet too many of these historical vehicles sit locked away. These six men opened their garages to provide an inside look at their “drool-worthy” collections: 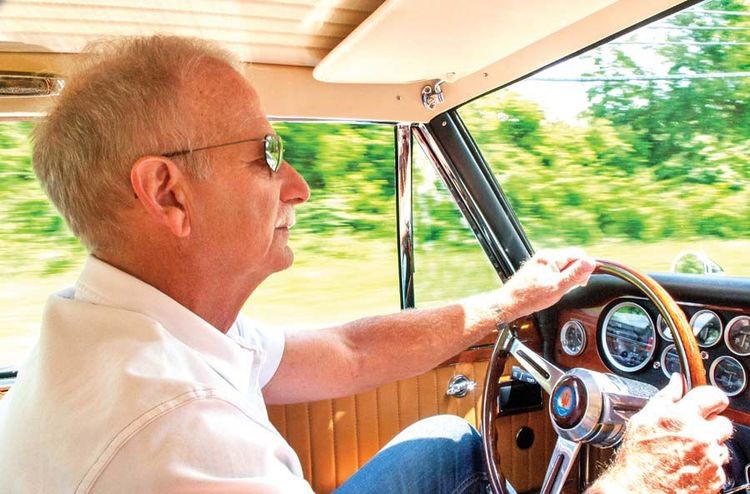 When a close friend died, Herb Williamson did what we all do when we lose a special person: he found a way to keep his memory alive. More precisely, he’s kept it running for 23 years. Tucked in a brick garage is Williamson’s big slice of automotive heaven, a 1967 Maserati Mexico he inherited from John Tipton, whose parting gift included eight cars in varying stages of repair. Though Williamson, 66, always loved driving and working on cars, he’d never had a full collection. Daunted by restoring (and storing) each one in between running his roofing business in East Hartford, he eventually whittled down to a select trio of Italian and British sports cars. We’re in the Maserati, the only remaining car from Tipton’s collection, bombing down Route 2 with the windows down.

“I’ve been playing a lot more golf lately than I have fooling around with cars,” he says over the throaty exhaust. Tipton would be proud of Williamson’s fine touches — the white leather roof with its woven hand straps, chrome toggle switches poking out from the polished mahogany dash, and his enthusiastic right foot that blasts us past everyone.

That Tuscan-style garage is every married man’s paradise. There’s a coated floor, heat, bathroom, TV and two more heart-stoppers, a 1963 Iso Rivolta and a 1954 Austin Healey 100M LeMans. “I like sports cars more than anything else,” he says. Williamson is also restoring a 1969 Dodge Daytona that sat in a Colchester barn for 30 years. He’ll sell that one. The others, those masterpieces that look too delicate to drive, will be closing on you in your rearview. 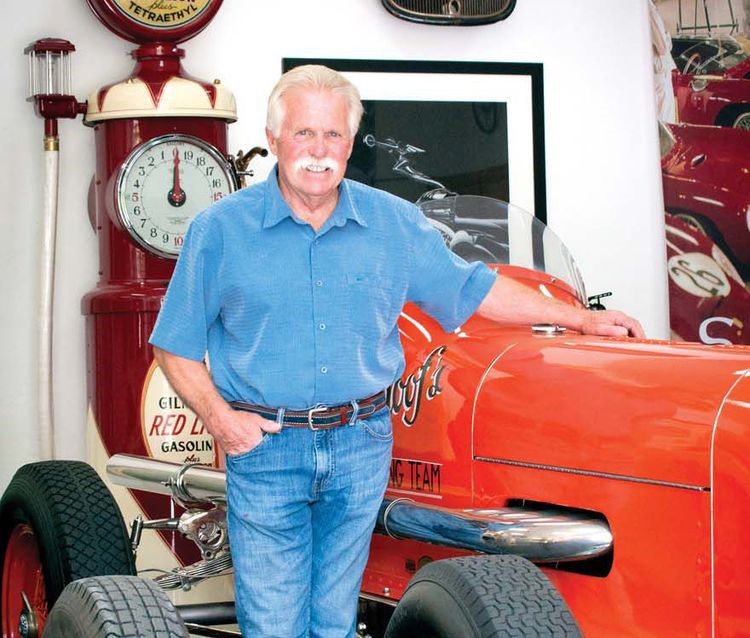 Wayne Carini with his Schoof Special, which raced at Indianapolis in the 1930s and ’40s

Sight unseen, would you drop a few hundred grand on an old car because one guy told you to? If the guy has a bushy white mustache and goes by the name Wayne Carini, have no doubts. Carini, 65, knows everything and everyone in the classic car world. He even hosts a TV show called Chasing Classic Cars.

He will spout encyclopedic descriptions of a three-wheel 1948 Davis, cite the exact issue of Hot Rod which featured his 1927 Isky, and knows enough to have removed the rear seats on the 1932 Auburn Boattail Speedster before he bought it to make sure it’s a genuine convertible. Jay Leno’s coming to his birthday party.

“People work hard for a lot of things,” he says. “I always wanted a barn full of cars.” 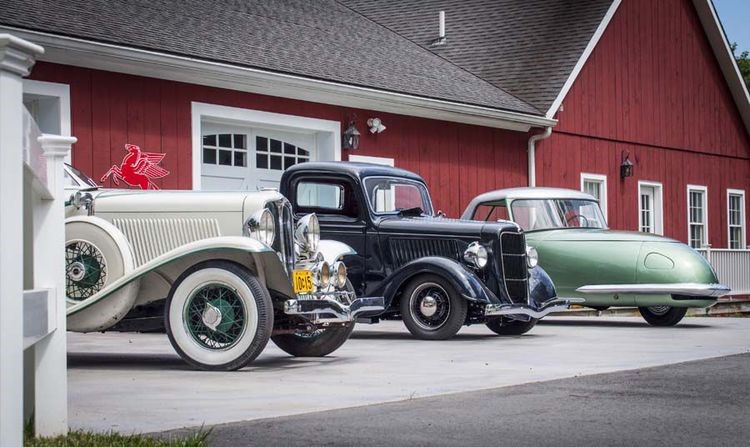 On the site of a former equine clinic, Carini’s sprawling property houses a few dozen museum quality cars, racers and trucks. There’s not a trace of dust or oil. He wrenches on each one himself, a pleasure rivaled only by mowing the lawn (a stress relief that takes almost a whole day). Vintage motorcycles line his home office. Carini won’t sit here long, or any place for that matter. His pulse races for the next project, whether it’s selling a Lamborghini Countach at his F40 Motorsports shop on Route 66 or finding an unrestored Harley-Davidson sidecar across the country.

A camera crew follows him everywhere for his TV show, which has lasted eight seasons on Velocity network without any fake fights or scripted drama. Carini’s reality — dealer, restorer, curator and father who attends as many autism fundraisers as auto shows — is genuine like his cars.

What draws him to these old autos? “It’s the history,” he says. “Every car’s got a story.” 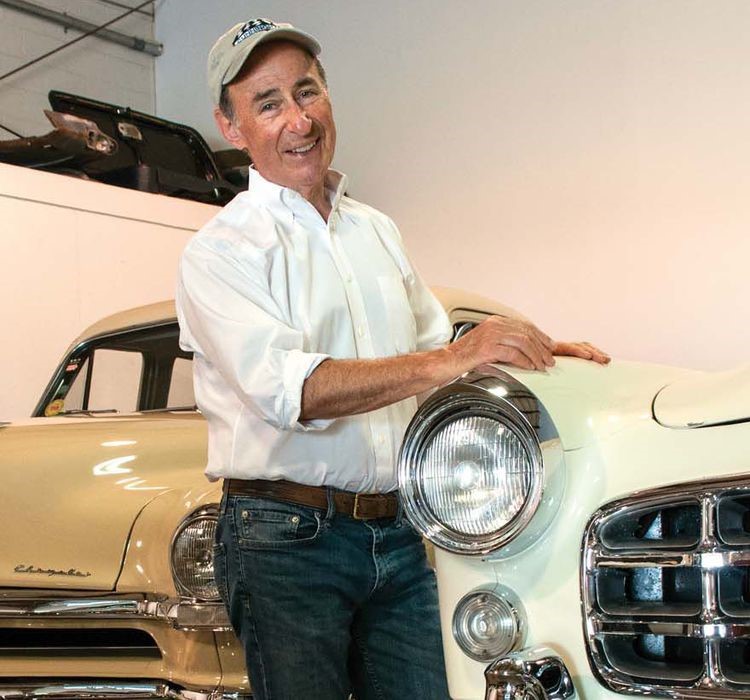 Chuck Schoendorf, with his 1955 Chrysler 300, dresses his Chryslers with dark steel wheels on black tires

Over email, Chuck Schoendorf said he owned a couple of hybrids, a statement that made us hesitant to even meet him. But there he sat in the Milford commuter lot, next to rows of forgettable family cars, in a 1952 Chrysler Saratoga Club Coupe. Schoendorf grins and we trail his burbling Hemi V-8 to visit half of his roughly 10-car collection. He’s a car guy, alright. His “hybrids” are made by Cunningham, a sports car manufacturer from the 1950s that blended Italian style with American muscle.

“I bought them because I love them,” says the retired insurance broker, 68, brushing by a 1952 Saratoga sedan he drove for 1,100 miles in a California rally. A towering 1955 Chrysler 300 sits with its front end lifted on a jack, as if the chrome-mouthed sedan was launching out his garage at full throttle. Schoendorf works on all of them. Detroit’s post-war heyday defined his youth, when automakers outdid each other with bigger, flashier and faster vehicles.

“A new model year was a big deal, where today it’s a yawn,” he says, remembering his father’s 1953 Chrysler that had the “epitome of a great engine.”

Schoendorf runs those original Chrysler V-8s in the unlikeliest of places, including three electric generators from the period. The others power a trio of 1952 Cunningham C-3s, which had their curvaceous bodies and lavish interiors fashioned in Italy before final assembly in Florida. Suave and light, his Cunningham’s look nothing like the bulkier Chryslers from the same era. Just 25 were ever made.

When he’s not waving the Chrysler flag, Schoendorf plays with a 1970 Fiat 500 and a one-off 1946 Lancia Aprilia race car. We’re too happy we met. 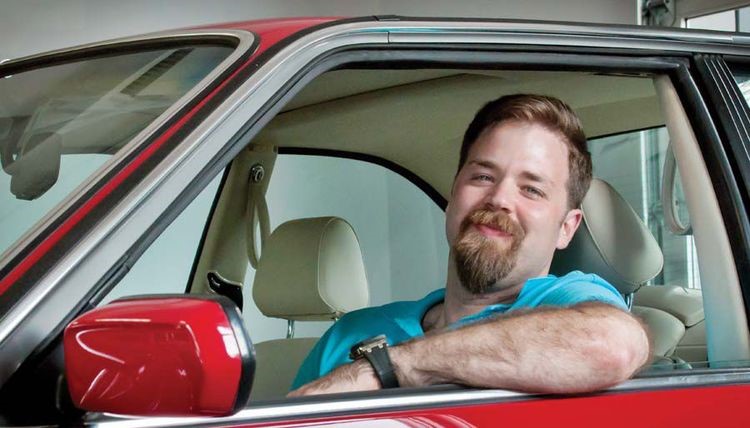 The U.S. government did everything possible to stop Matthew Ivanhoe from driving his Aston Martin. He waited months for an importer to release it, an expensive, paperwork-ridden process that legalizes foreign-market cars. But Ivanhoe knows paperwork. He sold his first car at 14, cashed out from an Internet startup at 25, and last May opened an exotic car dealership in New Canaan. Was it all worth it? He’s 30 and cruises in a V12 Zagato, one of the rarest British supercars of this century.

“If it’s a car I have, it has to run and drive as well as that car should,” he says inside his New Canaan showroom, The Cultivated Collector. “A lot of people with cars, they keep them on a pedestal.”

We visit his Norwalk storage facility just to hear the Aston start, and return to New Canaan in a customer’s 1959 Ferrari. Inside, we funnel past a 1989 Ferrari F40 worth $1 million, a couple more Ferraris and a Mazda Cosmo. Ivanhoe strokes a fiery red 1988 BMW M6, the first car he ever kept. “There is literally no amount of money I would sell this for,” he says. 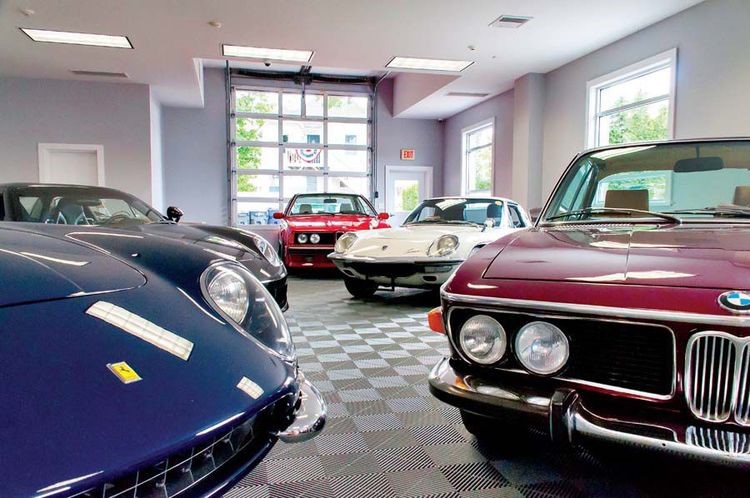 Ivanhoe and two employees take care of business, which relies exclusively on restoring and selling “high-end, investment-grade” cars. There’s more to it than metal. When clients travel to shows such as Pebble Beach, Ivanhoe plans their entire trips, even going so far as to entertain spouses who don’t like cars. Soon, he’ll invite local enthusiasts to his upstairs clubhouse for drinks, lectures, televised races and chit-chat. “I’ve been very fortunate to have the opportunity to work with these people,” he says. “I’m just a custodian, preserving history.” Ivanhoe is ordering another 12-cylinder Aston, the last of its kind with a manual transmission. The feds should go easy on him this time. 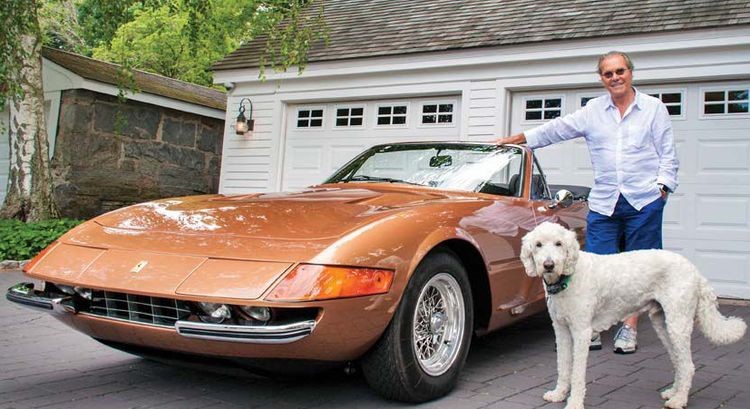 Herb Chambers wants a new sports car. At the age when our spines beg for nightly hot pads, 75-year-old Chambers is trim, tanned and thrilled to stoop into a racing seat just inches off the ground. Buying a Ford GT (the new supercar requires factory approval) and a 2020 Mercedes-AMG (so exclusive it isn’t yet named) is nigh impossible, even for the man who parks a helicopter on his lawn and owns the neighborhood marina. Even so, someone at his 57 car dealerships will likely cut him a deal.

The problem with older cars, Chambers says, is they don’t drive as perfectly as they look. And sometimes, like the 1995 McLaren F1 he’s stored for years at one of his Boston dealerships, they’re too valuable to move. “It’s such a massive investment because some knucklehead pulls out and causes millions of dollars in damage,” says Chambers, whose McLaren F1 sold for a record $15,620,000 — the most valuable post-1970 automobile to ever sell at auction — at Bonhams’ Quail Lodge auction in California Aug. 18. “I drove my Rolls-Royce to get the newspaper and the damn engine is skipping and popping, every time you can find fault with them.”

But never the Ferrari Daytona Spider. After starting a photocopier business inside an old Hartford barbershop in 1965 — which became the nation’s largest distributor of photocopy equipment — a young Chambers treated himself to the 1972 golden brown convertible. A year later in 1973, he wrecked it and broke his jaw. The car vanished. In 1985, two years after selling his company, Chambers thought he’d buy a Cadillac in New London. He ended up with the dealership. The rest — 2,500 employees and $2.7 billion in annual sales across Massachusetts and Rhode Island — is history.

“I’ve been very fortunate that I always seem to be in the right place at the right time,” he says, recalling his boyhood in Boston’s Dorchester neighborhood and how, after leaving the Navy, he tended his mother’s bar and she fired him. “There are a lot of people who are at the right place, but they don’t know it.”

Five years ago, Wayne Carini called. He’d found the exact Ferrari in Denver. Chambers paid nearly $1 million for the car, knowing Carini would restore the rare Italian to perfection. His Daytona is impeccable, in every feature incomparable to the more luxurious and comfortable 2017 Ferrari 488 Spider he’s ordering. “Cars are less important to me,” he says. “What’s important is that Ferrari.” 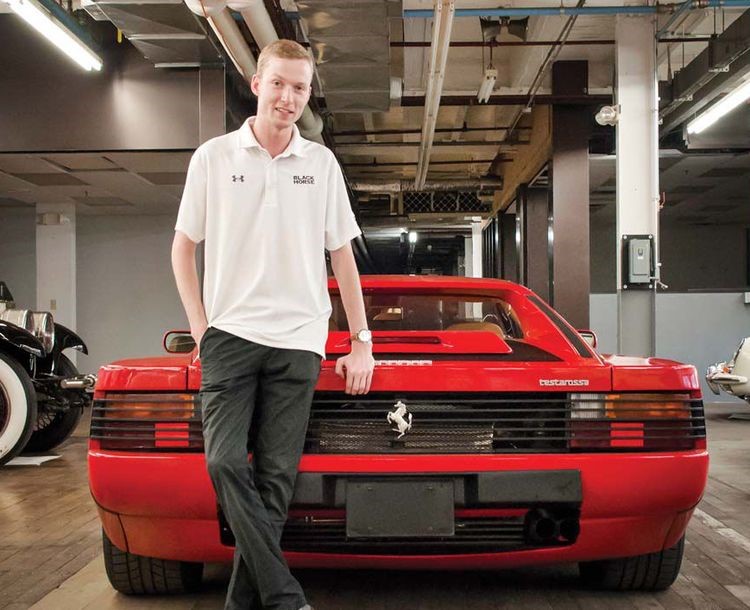 Every great collector starts with something small. For Maximilian Van Munching, something is a 1991 Ferrari Testarossa he bought at age 20 after watching The Wolf of Wall Street. He’s now 21. “It’s an investment,” says Van Munching, compressing his tall, lanky frame into the Miami Vice supercar. “I told my dad, if I buy this car, I will make money.”

His cheeks flush as he revs the Ferrari’s flat-12 engine and clicks the metal-gated shifter into first. We’re in a musty brick warehouse in Bridgeport, behind a barbed-wire fence, where the Black Horse Garage stores and services an impeccable cast of European cars. Van Munching is here detailing them before finishing his advertising degree at Loyola University. He admits Mad Men’s Don Draper as his fictional likeness. But for someone who just hit legal drinking age, Van Munching’s pop culture nostalgia cuts deeper than his peers. “Unlike most kids my age, I like old cars,” he says. “My idol is Steve McQueen.” He considered a Ferrari 308 like Tom Selleck drove in Magnum P.I. But buying a Testarossa in its final model year was the smarter choice.

Have you heard of Heineken? After Prohibition was repealed in 1933, the Van Munching’s imported America’s first case and ran the beer distributorship until 1993. His grandfather created Amstel Light. He only mentions it to explain how a kid can afford his $100,000 dream car, and how in a few years, he’ll park many more next to the Testarossa. There’s no arrogance — and no power steering — in his future.