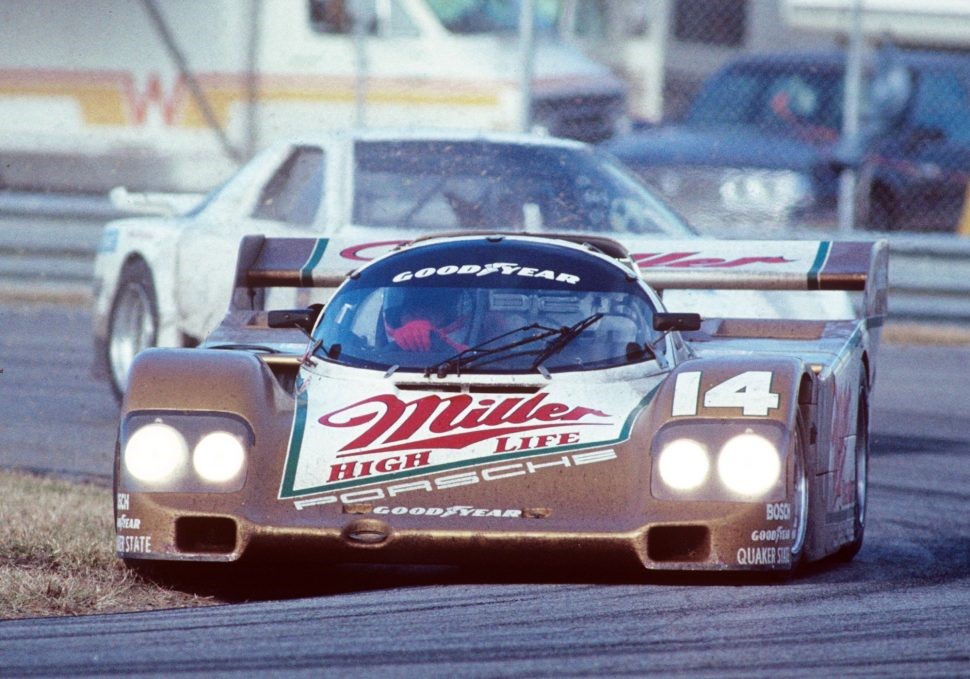 IMSA’s GTP (Grand Touring Prototype) class was founded in 1981, in response to the FIA’s Group C class for sports-car prototype racing cars. Like the Can-Am cars that preceded them, the IMSA GTPs were among the fastest and most-advanced cars of their day, and a quarter-century after the class was discontinued, fans still mourn its passing. At the 2018 Amelia Island Concours d’Elegance, IMSA GTP cars will be celebrated with a dedicated class and a seminar that recalls the glory days of prototype racing in North America.

Group C and GTP cars were similar, but not the same. IMSA focused less on fuel economy and a bit more on driver safety than the FIA, a distinction than can be seen in difference between the Group C Porsche 956 and its longer-wheelbase fraternal twin, the Porsche 962, which dominated IMSA GTP racing from 1985-’87. In addition to adding nearly five inches to the wheelbase to prevent impact injuries to the driver’s feet, the IMSA 962s carried a 120-liter fuel cell, as compared to the 100-liter limit mandated by the FIA’s Group C. In terms of performance, both the 956 and the 962 were capable of speeds above 350 km/h (218 mph), and the 962 proved even faster than the revered Porsche 917/30 Can-Am car up Watkins Glenn’s Wedgewood Straight.

Both GTP and Group C cars featured enclosed cockpits, with aluminum, carbon fiber, and Kevlar generally used to construct the monocoque and body. Though labeled as “prototypes,” the cars resembled absolutely nothing in a dealer’s showroom, but instead were built solely for the purpose of lapping a circuit as quickly as possible. Most IMSA tracks required more downforce for higher cornering speeds, while European circuits run in FIA Group C competition were often more about top speeds, requiring less downforce and lower drag. 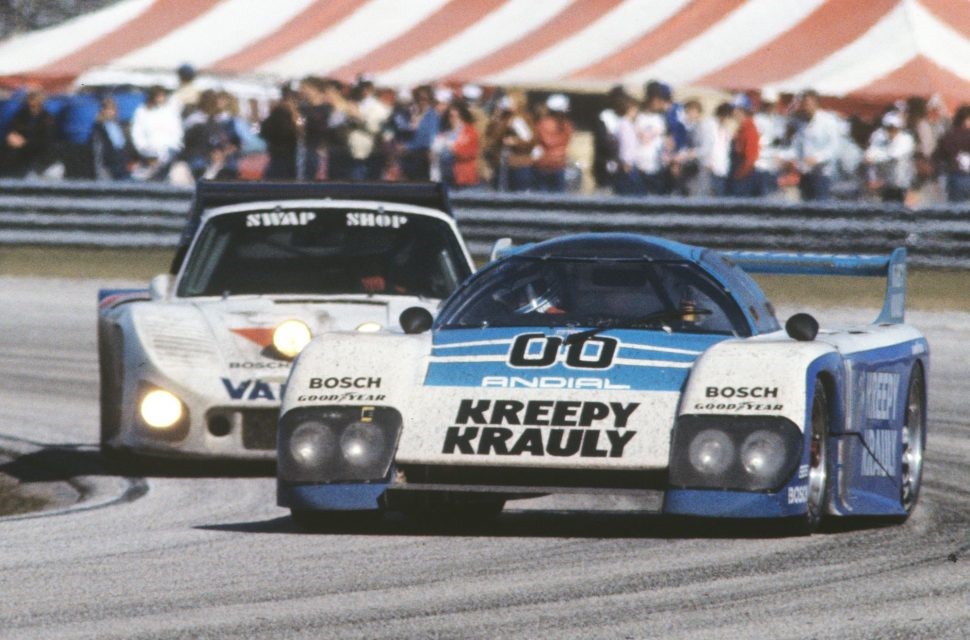 As with Can-Am, engine displacement and configuration weren’t regulated by IMSA GTP rules. Forced induction was permitted, and favored by many teams for its lower fuel consumption, since even under IMSA rules the amount of fuel supplied for a race was limited. Privateer teams were an important component of IMSA racing, so every effort was made—in the beginning, anyway—to level the playing field in terms of cost, power, and driver safety.

The first full season of GTP racing was 1982, when the championship was won by John Paul Jr. in a Porsche 935. The March 83G was the chassis to beat for the next two years, with Al Holbert clinching the title in a Porsche-powered March in 1983, followed by Randy Lanier’s championship in a Chevy-powered March in 1984. Holbert repeated as champion, this time behind the wheel of a Porsche 962, in 1985 and 1986, while Chip Robinson took top honors with a 962 in 1987.

As quickly as it began, the reign of the Porsche 962 ended in 1988, when Nissan entered the series with its GTP ZX-Turbo. Geoff Brabham took this car to championships in 1988-’89, repeating with its successor, the Nissan NPT-90, during the 1990-’91 seasons. A new champion was waiting in the wings, however: Introduced during the 1991 season, the Toyota-powered AAR Eagle Mk III was about to rewrite the record book on winning. 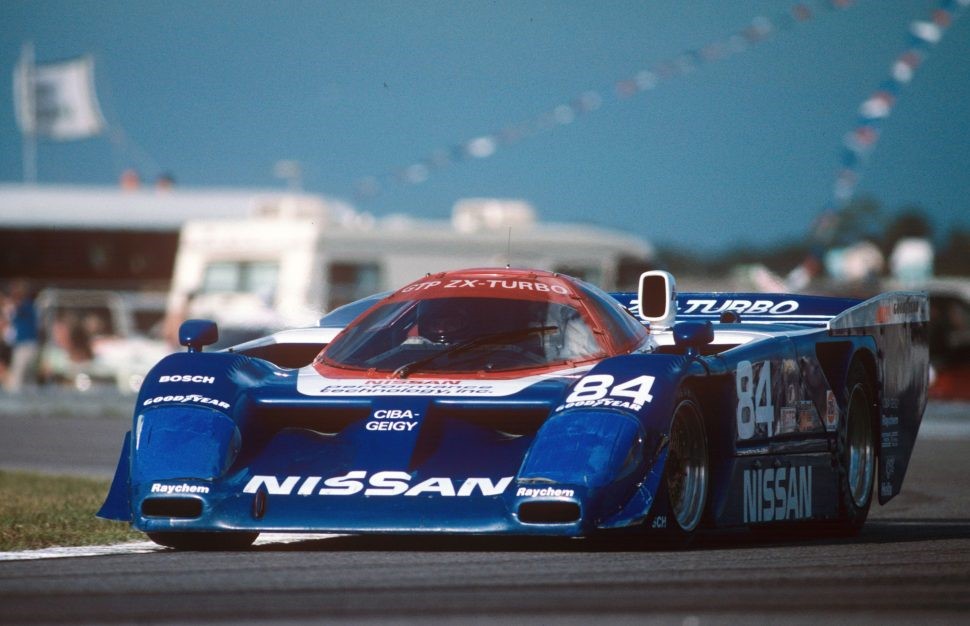 During the 1992 IMSA GTP season, Juan Manual Fangio II racked up an impressive seven wins in 15 races behind the wheel of the #99 AAR Eagle Mk III, while his teammate, P.J. Jones, put up another two victories, easily handing the championship to AAR and Toyota. Impressive though the performance was, it paled in comparison to 1993, when the Toyota-powered team earned victories in every race contested, even taking the top two steps on the podium at Miami, Atlanta, Lime Rock, Mid-Ohio, Laguna Seca, Portland, and Phoenix.

The dominance of the AAR Eagle Mk III was one of the factors that led to the demise of the GTP class. By the final season, privateer teams could no longer compete with factory efforts from Toyota and Nissan, reducing the overall number of GTP cars in the field and hence, spectator interest. Across the Pacific, the Japanese economy was in shambles, and by 1994 even manufacturers could no longer justify the expense of multiple racing programs. Like the Can-Am series before it, a combination of external forces and the overbearing success of a single team signaled the end of IMSA GTP racing.

Though the cars to be shown at Amelia Island have not yet been confirmed, it’s safe to bet that the Porsche 962 will be well-represented, along with the AAR Eagle Mk III and Nissan’s ZX-Turbo and NPT-90. Jaguar won its share of races in GTP, as did the March 83G chassis with several engine manufacturers, so it’s likely examples of these will be displayed, too. The panel discussion will be hosted by Bob Varsha, and expected participants include Hurley Haywood, David Hobbs, Davy Jones, Tommy Kendall, Brian Redman, Chip Robinson, and Mark Raffauf, IMSA’s executive VP during the Camel GTP years.