Organized and sanctioned by the Sports Car Club of New Hampshire, the 2014 Subaru Mt. Washington Hillclimb will be a 3-day motorsports festival including 80+ car competition field filled with some of the best drivers from around North America and the world as well as a contingent of rare vintage race cars.

Also known as the “Climb to the Clouds”, the Mt. Washington Hillclimb is one of America’s oldest motorsports events, first run in July, 1904, seven years before the first 500-mile race at the famous Indianapolis Motor Speedway and twelve years prior to the inaugural Pikes Peak Hillclimb in Colorado. The Climb to the Clouds was run sporadically from 1904-1961, then not again until 1990 when it was run consistently until 2001. Following a ten-year hiatus, the Mt. Washington Hillclimb returned in 2011 as part of the 150th anniversary celebration of the Mt. Washington Auto Road which first opened on August 8, 1861. 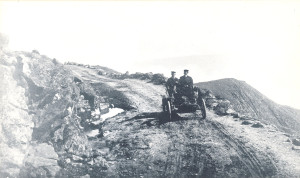 L.J. Phelps sets the first official speed record at the Mt. Washington Auto Road in August of 1903, a year prior to the first Climb to the Clouds Hillclimb. Phelps record time was 1 hr 48 min and he drive his own car, a “Phelps”.

Originally referred to as the Mt. Washington Carriage Road due to the horse-drawn wagons that traversed the road to the summit of Mt. Washington in the late 1800’s, auto manufacturers believed that the Carriage Road would serve as the perfect proving ground for them to demonstrate the ability of their new “horseless carriages.” Promoted as “the greatest contest of motor vehicles ever held”, the inaugural Climb to the Clouds in 1904 included manufacturers such as Rambler, Mercedes, Oldsmobile, Stanley Steamer, Pierce and a high priced Daimler.

In the 1904 Hillclimb F.E. Stanley from Newton, Massachusetts, co-creator of the famous Stanley Steamer, drove his 6-horsepower, 800-pound steam-powered Locomobile to the summit of Mt. Washington only to be beaten by Harry Harkness from New York driving a 40-horsepower Mercedes that weighed 2,200 pounds. Harkness posted a winning time of 24 minutes, 37 and 3/5 seconds.

Since that first year of competition, many well-known drivers have competed and won the Climb to the Clouds including “Cannonball” Baker in 1928 & 1932 and the legendary Carroll Shelby in 1956. Driving a Franklin in 1928, Baker raced to a time of 14:49.6 seconds. Carroll Shelby, driving a specially prepared Ferrari roadster in 1956, posted a record-setting run of 10:21.8 on his way to victory. 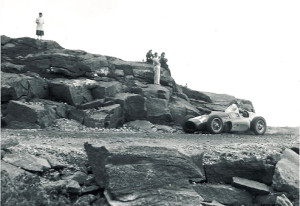 Carroll Shelby racing a Ferrari in 1956

In 1961 Bill Rutan from Connecticut drove his Porsche Carerra-powered Volkswagen to another new record time of 9:13.0 that would stand for the next 29 years – until the return of the race in 1990 when Champion rally driver Tim O’Neil from nearby Franconia, NH drove his 300+ horsepower all-wheel-drive Volkswagen Rally Golf to the summit in an amazing time of just 7 minutes and 45 seconds.

Bill Rutan setting new record of 9 minutes, 13 seconds in the 1961 Climb to the Clouds

Following the return of the Mt. Washington Hillclimb in 1990, the event was run annually as part of the Mt. Washington Auto Road’s summer event schedule until 2001. During that time, several new course records were shared between 7-time Sports Car Club of America National Rally Champion Paul Choiniere from Shelburne, VT and multi-time Canadian Rally Champion Frank Sprongl from Mississauga, Ontario. Sprongl went on to set a record time of 6:41.99 in 1998 driving his 500 horsepower Audi Quattro S2 that would stand for 13 years. 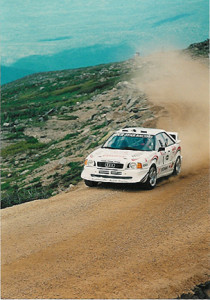 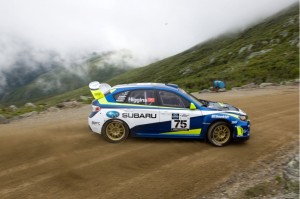 Those racing in the 2014 Subaru Mt. Washington Hillclimb will be competing on the very same 7.6 mile road as the original 1904 event 110 years earlier. Of course these days the surface has changed with nearly 87% of the road now asphalt and 13% still gravel. The 7.6 mile Auto Road is one of the ultimate challenges for driver and automobile alike. The serpentine road is lined with trees on the lower half and dramatic drop-offs above halfway as it winds its’ way to the 6, 288 foot summit of the Northeast’s tallest peak – Mt. Washington.

David Higgins recently stated “The hill is one of those special driving events and it’s mix of different surfaces, bumps and deceptive bends makes it so tough. The added history of the climb also adds some extra pressure. Then you throw the weather into the mix and you know you are going to have to be at your best to succeed.”

When asked about returning for this year’s Climb to the Clouds, Pastrana said “This year is very special for me because I had the record and now my teammate David Higgins has it. We with both get the chance to race with similar equipment and with similar conditions. It will be a fight to see who can claim the fastest time and a challenge for everyone competing to try and take the record, because anyone expecting to win will probably have to post a time that is faster than anyone has ever been.”

Also returning to Mt. Washington this year will be three very popular racers from New Hampshire who have competed in every Mt. Washington Hillclimb race since the event returned in 1990 – 14 events in all. These drivers include David Patten from Dunbarton, NH; Drew Young from Loudon, NH and Don Taylor from Claremont, NH. All three drivers are regular competitors in the New England Hillclimb Championship which hosts hillclimb events on access roads at the Mt. Ascutney State Park, Burke Mountain State Park, Okemo Mountain Resort and Mt. Philo State Park – all of which are located in the state of Vermont. Taylor will be pulling double-duty at this year’s hillclimb as he’ll also serve as the event’s Chief Technical Inspector.

The ever-popular Vintage Class meanwhile features a lineup of ten prestigious racing cars from the 1940’s through the late 1970’s. Although all vehicles featured in this class have played a significant role in motorsports history through the years, the 1958 Porsche Carrera-powered Volkswagen “Bathtub” probably boasts the most Mt. Washington history of all cars entered. Driven in 1961 by the legendary Bill Rutan from Connecticut, Rutan and the “Bathtub”, as it had come to be known, returned to Mt. Washington 29 years later in 1990 and raced to the top of Mt. Washington once again – beating his 1961 record-setting time by almost a minute!

Although Rutan won’t be sitting behind the wheel of the “Bathtub” when it return to Mt. Washington this coming June, the completely restored Carrera-powered Volkswagen will be driven by another well-known Connecticut racer, Wayne Carini from Portland, CT. The popular host of the Velocity Channel’s “Chasing Classic Cars” television show, Carini will not only be racing the vintage Volkswagen, he’ll also serve as the Grand Marshal of the 2014 Subaru Mt. Washington Hillclimb.