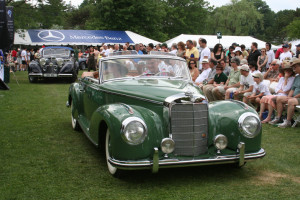 New York, New York (PRWEB) May 20, 2014 – The world’s fastest street-legal car, the 270-mph Hennessey Venom GT will slow down long enough to spend two days at the Greenwich Concours d’ Elegance, May 31st and June 1st at Roger Sherman Baldwin Park in Greenwich, Connecticut. It will be joined by the latest version of America’s only flying car, the Terrafugia Transition®.

These two extremes of automotive technology will join 250 of the most beautiful classic automobiles in the world on a verdant peninsula in Greenwich Harbor. The two-day Greenwich Concours, now in its 19th year, uniquely features American classics on Saturday and imported classic models on Sunday. Show-goers can also board Sunseeker Yachts and America’s Cup 12-meter yachts on both days.

2014 is of course the 50th anniversary of the Ford Mustang and the 100th anniversary of Maserati, and the Greenwich Concours will celebrate with special displays for both. The Mustang display includes the Shelby GT350R that American racing legend Mark Donohue raced early in his career.

Speaking of racing legends, another unforgettable highlight of the 2014 Greenwich Concours will be the one-of-a-kind 1966 Fitch Phoenix, a sports car designed by one of America’s greatest drivers, and World War II fighter pilot, John Fitch (1917-2012). The Greenwich Concours might be a last chance for many to see the dramatic Phoenix, as it will be auctioned off by Bonhams.

In another Greenwich Concours tradition, spectators will be able to check out the latest models from Mercedes-Benz, BMW, Cadillac, Maserati, Aston Martin, Ferrari, McLaren, Bentley and Volkswagen, the event’s many prestigious sponsors. A special section of classic Cadillacs will celebrate the brand’s history from 1900’s to the glorious postwar tailfin era.

AmeriCares, the international relief organization, is the charitable beneficiary of the Greenwich Concours d’ Elegance.

Each event features some 125 cars and awards trophies for Best-of-Show, Peoples’ Choice and various classes. And, so it is possible to see classic American Auburns, Cadillacs, Cords, Duesenbergs, Packards and Pierce-Arrows along with Corvettes and 1960’s muscle cars on Saturday, and then Bentley, Ferrari, Maserati, Mercedes-Benz, BMW, Aston Martin, Rolls-Royce models and many others on Sunday. Classic American and imported motorcycles are on display both days.

Featured as the poster car for the 2014 Greenwich Concours, the Fitch Phoenix will be offered for sale in the Bonhams auction on Sunday, June 1st that is part of the Concours event. Among other ultra-rare cars to be displayed are a 1914 Detroit Electric Brougham once owned by President Dwight D. Eisenhower’s mother-in-law; a one-of-a-kind 1950 Rolls-Royce Silver Wraith; one of the few Russian-made Volgas in the country, and a Glasspar G-2, which preceded the Chevrolet Corvette as one of America’s earliest fiberglass sports cars.

Return of the Flying Car
The Terrafugia Flying Car prototype made its debut at the 2009 Concours. This year, the near-production Terrafugia Transition®, the only light-aircraft designed to meet Federal Motor Vehicle Safety Standards, will display its conversion abilities on the Concours show field.
Wayne Carini, the well-known collector and the host of the Velocity Channel’s “Chasing Classic Cars” TV show, will serve as Grand Marshal for the Greenwich Concours. Noted Packard collector and actor Edward Hermann will be chief judge. Radio host Bob Long will broadcast live from the Concours for two hours each day.

Classic Racing Yachts
The Greenwich Concours uniquely offers an amazing opportunity for sailing enthusiasts. Berthed across from the Concours grounds in Greenwich Harbor, the ex-America’s Cup 12-meter yachts America II and Lionheart will be on view for Concours spectators to look over the magnificent vessels.
Like the competition cars on display at the Concours, the majestic racing yachts represent the pinnacle of their period’s technology for generating speed, in this case on water.

There are usually another 90-100 classic automobiles to see in the auction tent, many of them rarely seen models from private collections. (Admittance to the auction tent on Sunday requires purchase of a catalogue by bidders and spectators.)

AmeriCares
Ranked as one of the most efficient charitable organizations in the country, AmeriCares has since 1982 delivered more than $11 billion in aid to help people in 164 countries. The organization responds to humanitarian emergencies including earthquakes, hurricanes and tornadoes, and was on the scene with aid during Hurricane Sandy in 2012.

Greenwich Concours Basics
The Greenwich Concours Americana and the Concours International are open from 10am to 5pm on Saturday and Sunday. The admission is $30 per day, or $45 for a two-day pass, and children 12 and under are free when accompanied by an adult. Parking is free, and food service is available on site. The dates for 2014 are May 31 and June 1, rain or shine.

The ease of getting to the Concours also contributes to its popularity, for it’s immediately off Exit 3 of I-95, and within a block of the Metro North train station with express service from New York and Boston. And, within walking distance, is Greenwich Avenue – the Rodeo Drive of the East – with all of its many restaurants, antique shops, luxury stores, and numerous boutiques. Hotels, ranging from the modest to ultra-luxe, are also close by, with the Delamar, the host hotel, right at the Concours site. The Concours web site, greenwichconcours.com includes a map, driving directions, and contact information.

No wonder the North American edition of 1000 Places To See Before You Die lists the Greenwich Concours as one of those places!

For the original version on PRWeb visit: http://www.prweb.com/releases/GreenwichConcours/ClassicCars/prweb11869416.htm