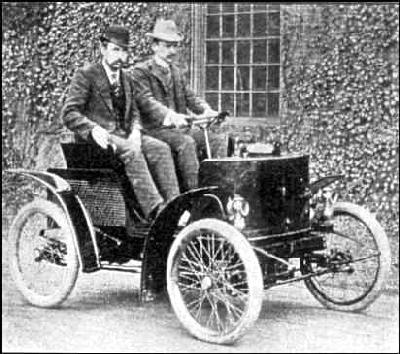 New Haven, Conn. – There seems to be general agreement among auto historians that the first closed course auto race in Connecticut was held at Branford Park in New Haven, a half-mile dirt track built for horse racing. The race meeting had two feature events, one for three-wheeled vehicles and one for four-wheeled vehicles, both being run in three heats. The date of the race meeting is generally cited as July 25, 1899. This date is reflected in several sources including Charles Betts’ Auto Racing Winners, 1895-1947: An Historical Reference Manual of American Automobile Racing (1948) and Allan Brown’s The History of America’s Speedways, Past and Present (2003).

In a 2008 article focusing on Connecticut race tracks, Brown clearly stated that, “Connecticut’s first recorded auto race was at Branford Park, a horse-racing track in New Haven, on July 25, 1899.” This would seem to indicate that Brown was very confident regarding the date.

However, more recent research has turned up evidence that this date may be off by a full year and in fact the Branford Park race more likely took place on July 25, 1900. This possibility was recently discovered by Donald Capps who is chairman of the Society of Automotive Historians Motor Sports History Section. Capps was digging into the very early automotive competitions in the United States for a possible paper on these events during the Late Victorian Era, 1895 to 1901, and sensed that there might be a problem with the date of the Branford Park race.

During his research, Capps discovered contemporary articles in The New York Times and the Chicago Tribune on an event held at Branford Park in 1900. Initially, he thought this was a later event, but the winner listed by Betts was Hiram Percy Maxim in a Columbia — who was also listed as the winner of the first five-mile heat for four-wheeled vehicles in both the New York and Chicago papers.

In his article on the subject Capps states “This would strongly suggest that the Branford Park event took place on 25 July 1900 – and not in 1899 as the Betts and Brown dated the event. I am at a loss as how to explain that both Brown and the Betts getting the date wrong by an entire year, although Brown seemed to sense, at least at one point, either some doubt or at least ambivalence regarding the date.”

It is interesting to note that both the Times and the Tribune articles state that the Branford Park meeting was, “The first automobile race meet ever held on a race track in this country,” as the Times stated it. The Tribune article had the sub-heading, “Track Racing for Motor Vehicles Inaugurated in America,” making the same claim as the Times. Capps goes on to state “Of course, there is the awkward problem of the race meeting held at Narragansett Park in Cranston, Rhode Island – another horse-racing track – in September 1896, which would tend to cast doubt on this claim. The race featured 7 entrants and was won by a Riker Electric car. In addition, there was also the event run in October 1899 on a circular dirt horse track at Galesburg Illinois District Fair Grounds, which was essentially a match race scheduled for 50 miles. The race between F.B. Snow in a Duryea and E.V.D. Morris in a Winton was halted at 15 miles when Snow’s vehicle dropped out with ignition problems.” 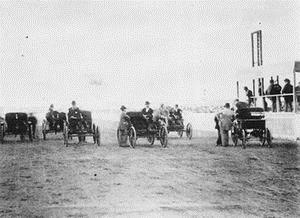 In any case, there seems to be no doubt that the Branford Park race was the first closed course auto race in Connecticut but historians should note, thanks to Don Capps’ research, the actual date of the race was July 25, 1900.

According to historian Allen Brown, the second auto racing venue in Connecticut also began as an active horse track, Charter Oak Park in Hartford. It was larger than Branford Park, a one-mile dirt oval. Charter Oak Park featured auto and horse racing from 1904 to 1929.

Connecticut has had 31 oval tracks. Only 3 are still in operation. Stafford Motor Speedway, the oldest, is located at the Stafford Springs Fairgrounds. The half-mile dirt oval was built as a horse track in 1892, and the first auto race ran in October 1934. There is no record of any auto racing at Stafford again until weekly stock car racing started there in 1948. The original dirt track was paved with asphalt in 1967 and it has remained in operation ever since featuring NASCAR Modified racing.

The second-oldest active oval track is Thompson International Speedway in the state’s northeast corner. Built in 1940 as a 5/8-mile asphalt track, it was one of the first in the country to be built as a paved track. Most paved tracks built before 1945, including the Indianapolis Motor Speedway, started out as dirt tracks. Thompson Speedway also had different configurations of road courses—the first known in the state—in operation from 1952 to about 1978. Part of one of the old road courses is still visible as part of the pit area. A little-known fact about Thompson is that it is the only Connecticut track ever to host what is now known as NASCAR Sprint Cup races (originally called NASCAR Grand National). The third active oval track is Waterford Speedbowl, built as a dirt track in 1951 and converted to a paved track a month later.

Lime Rock Park in northwest Connecticut is the only active road course left in the state. Lime Rock is a 1.53-mile paved road course with eight turns. The track, which opened 58 years ago, on April 18, 1957, has been the site of numerous major road-racing events and was the favorite track of late actor and Westport resident Paul Newman.
Sources: Donald Capps, Society of Automotive Historians
Allen E. Brown, “A Short History of Connecticut Race Tracks” www.ctvisit.com
Archived Photos