The Bros. Taylor, sons of prototype and GT racing icon Wayne Taylor, are longtime General Motors stalwarts, even at the tender ages of 28 (Ricky) and 26 (Jordan). They race the #10 Konica Minolta Cadillac DPi-V.R prototype for their father’s team, Wayne Taylor Racing, in the IMSA WeatherTech SportsCar Championship.

New for 2017, the two Lime Rock PWC GT races will be the SprintX 60-minute format: Two drivers per car, with a mandatory driver and tire change at 25 minutes. 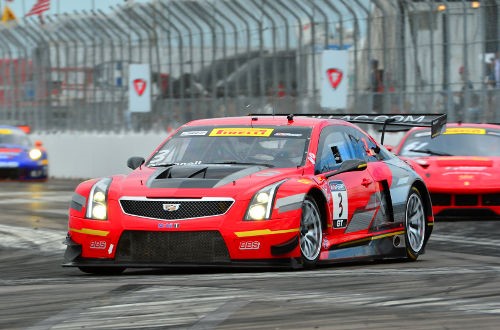 The Cadillac driver pairings haven’t been finalized, but word on the street is that Jordan will be O’Connell’s co-driver, and Ricky will be with Cooper.

“I’m really looking forward to the PWC season,” O’Connell, 55, said. “We had one bad weekend last year that really cost us, and I’ve been training hard all winter looking for some redemption. Ricky and Jordan are doing a great job proving themselves on the world stage, especially with these great Daytona and Sebring wins. I am very much looking forward to working with them this season in the SprintX races.”

“All of the Cadillac fans should be as excited as I am to have Jordan and Ricky with us for the SprintX races this year,” Cooper, 27, said. “Jordan has tested with us numerous times the last few years, so I’m sure they’ll slot right in and make their presence known. They are a perfect fit for Cadillac Racing’s SprintX program.”

“I am extremely excited to share the ATS-V.R with the guys,” Ricky Taylor said. “I have always been a huge fan of the ATS-V.R program and of Johnny and Michael, so getting a chance to contribute to the team and hopefully another championship is a great opportunity. Lime Rock is an extra special one for me as I have won there three times and it was my first professional win while driving with Max Angelelli.”

“I’m really looking forward to getting back in the Cadillac ATS-V.R,” Jordan Taylor said. “It’s been a few years since I’ve been to Lime Rock. It’s a track that I’ve always enjoyed… a true, old school American road course. The layout is very enjoyable for a driver and presents a big challenge for the engineers.”

In last year’s two “regular” PWC GT races at Lime Rock, O’Connell had a third and a 17th, while Cooper finished eighth and 14th.

Purchase general admission tickets at a discounted pre-event price now at limerock.com. Mohegan Sun Fan Hospitality and Personal Cabana passes are available, too. GA tickets are $23 for Friday, $45 for Saturday, and $60 for Fri./Sat./Sun. (the Sunday Royals Car Show) weekend.