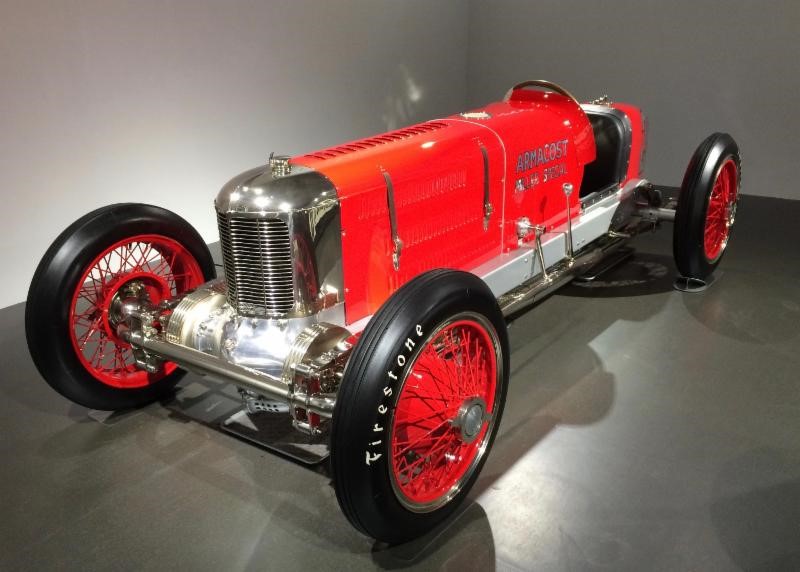 Jacksonville, FL – On the 110 th anniversary of the Indianapolis Motor Speedway, the
24 th annual Amelia Island Concours d’Elegance will celebrate the brilliant and radical ideas and the ground breaking cars that helped revolutionize America’s great race.

From its earliest days, the “500” was the cradle of innovation and the nursery of famous, sometimes obscure and occasionally infamous cars that drove the Indy 500 to become not just “the greatest spectacle in racing” but the most important auto race in the world.

Speed has always been the ultimate goal and the defining virtue of the cars that raced at the Indianapolis Motor Speedway. Indy’s ceaseless technological innovations dated to the days before World War I when a Grand Prix Peugeot showed the sport the way forward with its seminal high-revving DOHC four-valve engine. It ended the age of the behemoth, bringing science and fresh technology to Indy’s pursuit of speed.

The brilliant and revolutionary Peugeot begat the exquisite Millers and the mighty Offenhauser that reigned at Indy from 1935, finally surrendering its crown after its 28th “500” victory in 1976. Across three decades — 1931 through 1952 — Diesel power, as epitomized by the 1934 Cummins 2-stroke Diesel defied and defeated not only Indy convention but draconian fuel consumption rules in 1934. Cummins Diesel power went on to claim Indy’s coveted pole position in 1952.

By then the “500” had changed speed, shape and style through the Miller front wheel drive era of the 1920s through 1949, the birth of the Roadster in 1952, the rear engine invasion of the 1960s with the introduction of Formula 1 technology and the arrival of Formula 1 World Champions Cooper and Lotus. Ground effects arrived at Indy from Formula 1 in 1979 and, as in 1961, everything changed with speeds climbing steeply.

Some innovations came along too far, too fast turning Indy’s engineering and design orthodoxy inside out. Turbine engines twice came close to Indy’s victory lane, none with more engineering flair than the Lotus four-wheel-drive Type 56 that, in 1968, retired from the lead less than 23 miles from the richest payday in motorsport. A year after Jim Hall’s Chaparral 2K became the first Indy 500 ground effects winner, Dan Gurney’s radical stock-block Chevy V-8 Eagle BLAT — Boundary Layer Adhesion Technology — blew established ground effects doctrine apart, started from the front row of the “500”, and a week later won the Milwaukee 150-miler from that last row. It was promptly legislated out of existence. 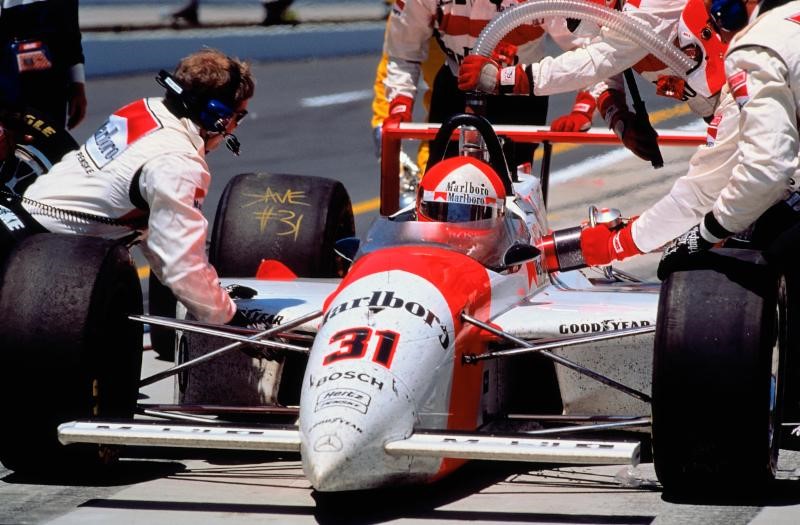 Al Unser Jr. drives the Penske-Mercedes PC 23 to victory at Indy in 1964 –
Photo courtesy of Daimler-Mercedes-Benz

Indy’s radical game changers got their ultimate revenge a quarter century ago when a new rulebook was written to lure major car manufacturers to the “500” with generous specifications for turbocharged stock block pushrod engines. Penske Racing’s brain trust read those rules with extraordinary care and the Penske-Mercedes PC 23 powered by the mega-horsepower Mercedes-Benz 500I V-8 was the result. It was such a leap that the 1,000-plus horsepower Mercedes 500I “pushrod” turbo V-8 became known as “The Beast”. It dominated the entire “Month of May”, upset Indy’s status quo and was, as the turbines and Dan Gurney’s BLAT Eagle before it, promptly banned.

To those who live for Indy’s Month of May, the “500” is the one race worth any cost. As race car technology advances the sanctioning bodies in some forms of motorsport have struggled to reduce speeds and expense in the name of fairness, economy and competition. To many of the brilliant, brave and creative people who design, build and drive Indy Cars such behavior is a kind of perverse technological sacrilege that is at odds with the vision of the Indianapolis Motor Speedway’s founders, the thousands who have raced there and the millions who, across two centuries, have cheered them at “the greatest spectacle in racing.”

For more info and to purchase tickets visit, https://www.ameliaconcours.org/shop/tickets

THE AMELIA will be held March 7-10, 2019 at The Ritz-Carlton, Amelia Island and The Golf Club of Amelia Island. For the Amelia’s full events schedule, including Saturday’s Cars & Coffee at the Concours and Sunday’s premier Amelia Island Concours d’Elegance, visit www.ameliaconcours.org . The show’s Foundation has donated over $3.45 million to Community Hospice & Palliative Care and other charities on Florida’s First Coast since its inception in 1996.