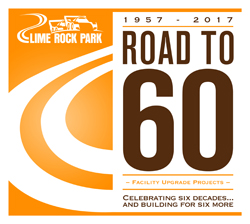 “From the paddocks and the bathrooms to the hillside viewing areas, we’re changing Lime Rock’s infrastructure from pre-historic to be perhaps the most fan friendly road course in North America,” Barber said.

Not since Lime Rock Park’s race track surface itself was re-built in 2008 has a construction project of this magnitude been greenlighted at the famous 1.5-mile automotive and motorsports venue in Connecticut’s Northwest Corner. Some of those projects will be complete in time for Lime Rock’s season-opener – the Memorial Day Weekend Trans Am Series, and Royals Sunday Car Show, May 22-24 – and many more in time for the IMSA TUDOR United SportsCar weekend July 24-25.

“In 2008, the track itself had to get done – it was exceedingly bumpy, it needed more guardrail, better run-off areas – and that’s what we did for the competitors. Road to 60 is for the fans,” Barber said. The target for completion of all Road to 60 projects is 2017, when Lime Rock Park celebrates its 60th anniversary.

“We’re doing what we need to do – what we want to do – to ensure the track’s professional racing future,” Barber says. “Major sports car races have defined Lime Rock since the day it opened, and I’m making sure that continues well into the future.

“It’s important to note that everything we’re doing, all the changes, all the improvements… all will make Lime Rock more useful, easier to navigate, more sensible – but all with an eye to making Lime Rock even more beautiful than it already is. I have no doubt that, just in the case of our paddocks, Lime Rock’s will be the most attractive in the U.S.”

Of the multitude of Road to 60 projects underway, the highlights are…

A-Paddock
To be completely re-done and much larger, plus: laser-graded-and-paved to eliminate standing water; it will be landscaped; there’ll be defined spectator walkways and cobblestone curbing; and the roadways through the paddock will be much wider. The new A-Paddock is specifically designed to allow two complete race rigs, tractors included, to park in-line – with a walkway in between – from inside Big Bend up to Victory Circle. Additionally, it will provide large and extremely efficient driving exercise and hospitality acreage for automakers as well as other ride-and-drive, press day and driver-training clients. 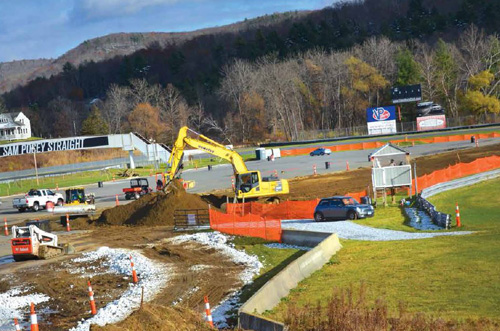 A-Paddock one week after construction began

April 2015: A-Paddock will have an attractive retention pond behind the newly placed Big Bend inside guardrail

B-Paddock
Being completely re-done: Paved in its entirety (and also laser-graded to eliminate standing water), there’ll be much more usable space. Like A-Paddock, it will provide large and extremely efficient driving exercise and hospitality acreage. 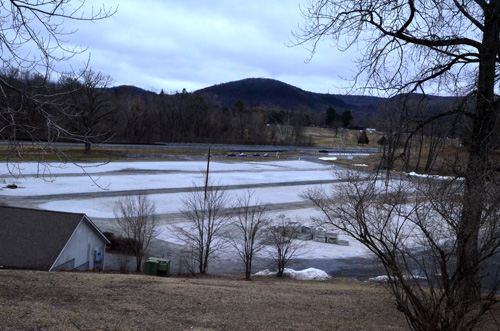 April 2015, B-Paddock: You can see all the white base gravel, in preparation for paving

Infield Spectator Hillside
Completely re-done: Close to 100,000 square yards of earth was moved, re-contoured, re-sloped and/or removed to dramatically improve and expand the sightlines as well as make Lime Rock’s famous “picnic-blanket-and-lawn-chair” experience even more enjoyable. With this re-working of the hill, close to 45 percent of the track can now be seen from this Hillside; with just a turn of the head.

Additionally, the Infield Spectator Hillside has been extended all the way through the inside curve of the Right-hander, creating an entirely new and exciting viewing area of No Name Straight and the Uphill. The Hillside reconfiguration has also allowed the spectator fencing to be moved even closer to the circuit in many locations. 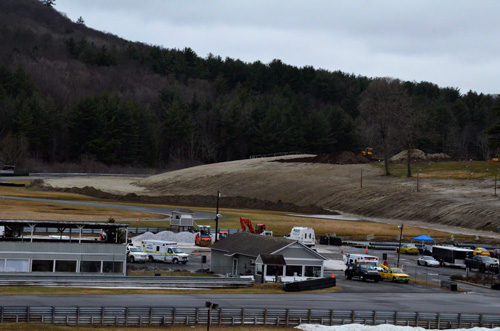 Hospitality Acreage
There will now be a total of three large areas of Lime Rock property dedicated to corporate, race team and VIP hospitality. The popular Outfield hospitality acreage remains essentially the same but the existing hospitality area in the Infield (between the Chalets) has been significantly increased in size and laser-graded. The third is an exciting new hospitality area that overlooks the Right-hander and No Name Straight. 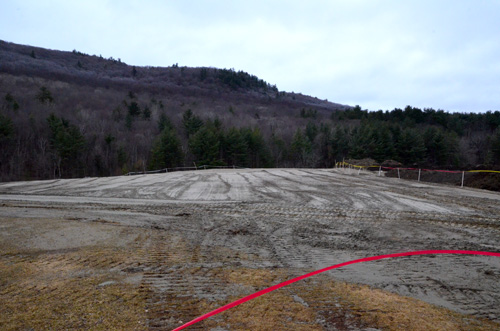 April 2015: The beginnings of the all-new Hospitality area overlooking the Right-hander. This is looking southwest, toward No Name Straight.

A-Paddock Rest Rooms
The Men’s Room will be completely rebuilt, and the Ladies Room totally refreshed.

Handicap Access
It will be improved and/or added throughout much of the facility.

Also: There’ll be a new PA system; expanded and robust Wi-Fi; improved cellular service; and improvements and expansions to the other spectator areas

Skip Barber added, “Road to 60 accomplishes many things for Lime Rock’s future, both short term and long. For each project, I asked myself, ‘What’s the best way to do this to make the Lime Rock experience better for the fan?’ While not forgetting the competitors, sanctioning bodies, the car makers, hospitality clients, the Lime Rock Drivers Club and all the driving and racing organizations, I’m pretty sure we’ve made good decisions.”