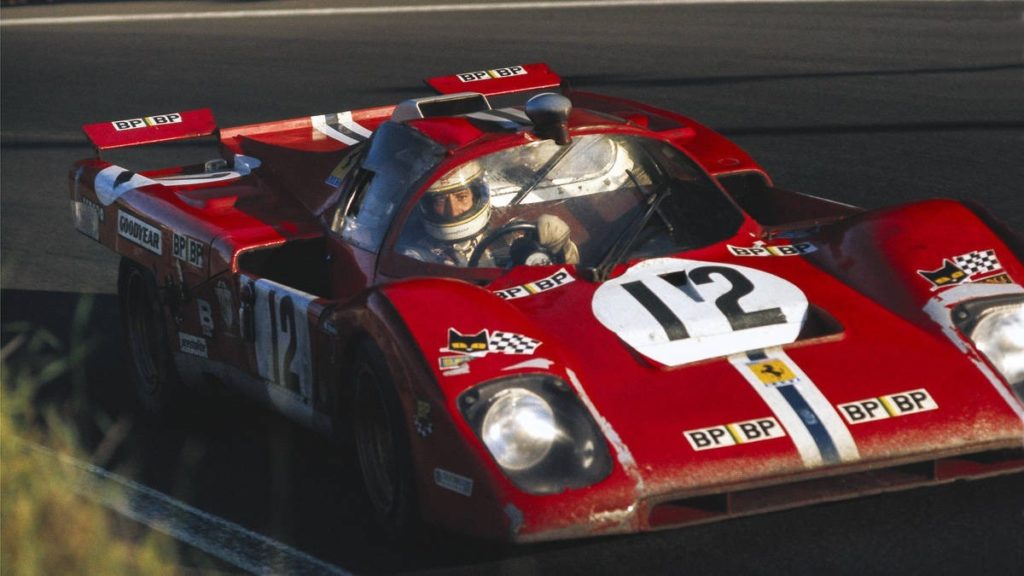 “Yanks at Le Mans” details every American who raced there between 1923 and 1979. Here, Tony Adamowicz swings his and Sam Posey’s 512 M through Tertre Rouge in 1971. Unable to match the dominant Porsches and not even in the fastest Ferrari, “Tony A-Z” and Posey would put in a gritty performance to carry their increasingly crippled NART Ferrari to a podium finish
Photo by RAINER SCHLEGELMILCH

What would make the eyeballs of your car- and race-loving special person light right up on Christmas morning? One of these here books, that’s what. Imagine the look of delirious joy that will smack his or her grille when they unwrap something as interesting and car-worthy as one of these? Except for maybe the Le Mans book, which won’t be out until next year. But you can put a little card saying it’s in the mail.

Twice Around the Clock: Yanks at Le Mans by Tim Considine

From the first Model T at the first running of the 24 Hours of Le Mans, there have always been Americans present in one capacity or another. Now, finally, their stories are told, in glorious, intricate detail by author — and sometime Autoweek contributor and famed motorsports journalist — Tim Considine. He poured 28 years of his life into this book: writing, researching and interviewing the American drivers, team owners and crew members who raced at Le Mans over almost six decades. Considine covers the years 1923 to 1979, and if there’s anything not in here, it probably didn’t happen. But what did happen is a cavalcade of riveting race reporting, wonderful anecdotes and hundreds of interesting stories I guarantee you won’t find anywhere else.

All your favorites are in it: Phil Hill, Dan Gurney, Carroll Shelby, Bob Bondurant — even Roger Penske, who co-drove a Luigi-Chinetti-entered Ferrari with Pedro Rodriguez and who was running third up until he missed a shift coming out of Mulsanne Corner and blew the engine. “Bonnier was behind me in a (Porsche) Spyder, and with all the smoke, he went off into the trees and wrecked. I remember, he was mad as hell at me.” 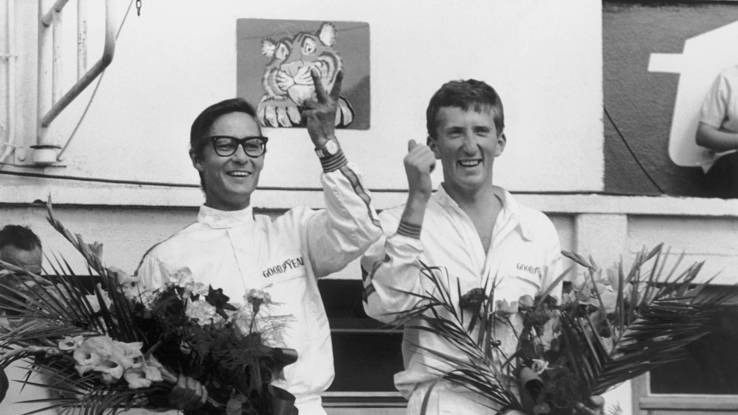 Surprise winners Masten Gregory and Jochen Rindt on the podium, their win in Chinetti’s Ferrari 275 LM likely because some gripless experimental Goodyear tires, changed every hour, saved them from the transmission weakness of similar Ferraris that year. Photo by LAT

There are more stories.

In 1965, when Masten Gregory and Jochen Rindt were paired in Luigi Chinetti’s Ferrari 275 LM, the car was shod with gripless experimental Goodyear tires that had to be changed every hour. This wound up saving them from the transmission weakness of similar Ferraris that year and lead to them winning the race. But was there a third driver (which would have disqualified them?). Considine investigated, but the controversy endures to this day.

“It’s all about the stories,” said Considine. “It’s hard to choose, but I think my favorite pull quote of all was from a dentist, Dr. Edwin Abate, an amateur from San Jose who paid 25 large to drive one of Barbour’s rent-a-ride Porsche 935s in 1979, the P.L. Newman/Whittington brothers year. Big rains in a 935 at Le Mans!

“Abate said, ‘I remember going down the Mulsanne, with the one wiper going, and lightning going off down at the end of the Mulsanne. I said to myself, ‘Dear Mother Mary, if I get killed here, that’s it … I can’t help it, I really love it here, it’s magnificent!’ He looped it in practice, slid off near the end of the race, but finished eighth overall and second in the IMSA class won by Newman. The magic of Le Mans.” 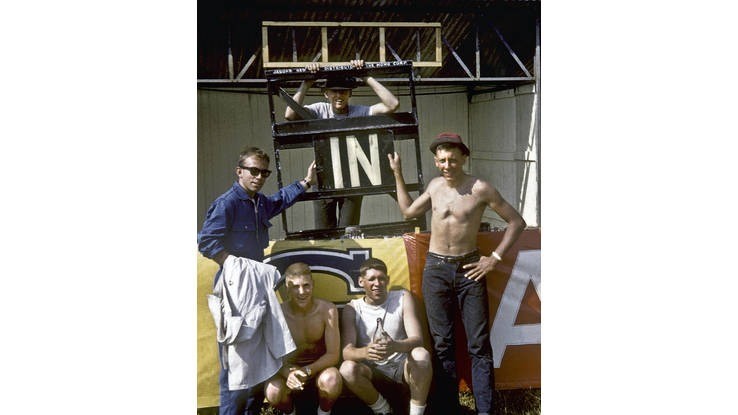 My own favorite story is one year when Briggs Cunningham needed a team of signal workers to man the Mulsanne corner signboards. Someone called the U.S. embassy in Paris — because why not? — got patched through to the Embassy Transportation Officer, a known racing enthusiast, who called his teenage American son. “Round up four of your friends, you’re going to Le Mans!” They got there on Vespa scooters, found the Cunningham team, got the signboard and scootered out to the Mulsanne corner. The boys’ story is told in sleepless detail, including one of the youth’s romance with a French local. Considine tracked down one of the boys — now men — somewhere in South America, got previously unpublished photos and gave the episode a whole page in Volume 1.

Yes, Volume 1. There are three volumes, all three of which slip into a single case that will make any bookshelf the envy of motorsports enthusiasts everywhere. At $350, this ain’t cheap, but for that, you get three big books, 925 photos, over 1000 pages, a million stories and 28 years of Considine’s life. I guarantee it is supremely worth it. Buy it here.

Already reviewed here, the book deserves another mention because of John Paul Jr.’s remarkable story. Born with a 50/50 chance of getting the terrible disease that claimed his grandmother, mother and sister, JP started exhibiting symptoms in 2000. Advances in treatment, combined with JP Jr.’s incredible will, have kept him alive. You can’t help but think that he will overcome this just like he overcame challenges on the racetrack and in jail, where he served time for complicity in his father’s drug dealing that financed the pair’s racing for several years. There is an awful lot packed into this one life and one book. Buy it here.

The Prototype by Sam Mitani

Full disclosure: I know and like Sam Mitani. We have both worked at car magazines our entire adult lives. Fuller disclosure: I am a character in the book: the thinly disguised “Mark Taylor of Auto News Weekly.” (Ha!) The book is a spy thriller set in the high-shrimp-and-fois-gras world of pampered car magazine writers, which is in itself kind of hilarious, at least to me. The protagonist is a low-seniority magazine staff member who stumbles into an international criminal conspiracy. It’s a fully functional spy thriller with fast cars, a couple private jets and several beautiful PR professionals. Yes, this is the life I/we lead. You’ll be drawn in by the plot and you’ll even stick with it as it gets progressively farther out there, including the surprise ending. And you might even get a kick out of the insider petty politics of some car magazines (not this one!). I hope they make a movie out of it. I want Redford to play me. No, he’s too old. Maybe Brad Pitt. Buy it here.

The Amazing Adventures of Stroker McGurk – Comic by Tom Medley

If you are a hot rodder of a certain age, you remember the work of Hot Rod cartoonist Tom Medley and his goofy but intrepid main character Stroker McGurk. Stroker comics appeared in Hot Rod from 1948 to 1965 and this book has all 70+ of them. See Medley’s presentation of motorsports innovations like the multi-engined lakes racer and the parachute used to slow the car that worked a little too well. McGurk never gave up, even when maybe he should have. At only $14.95 each, you can buy one of these for every hot rodder on your list. Buy it here. 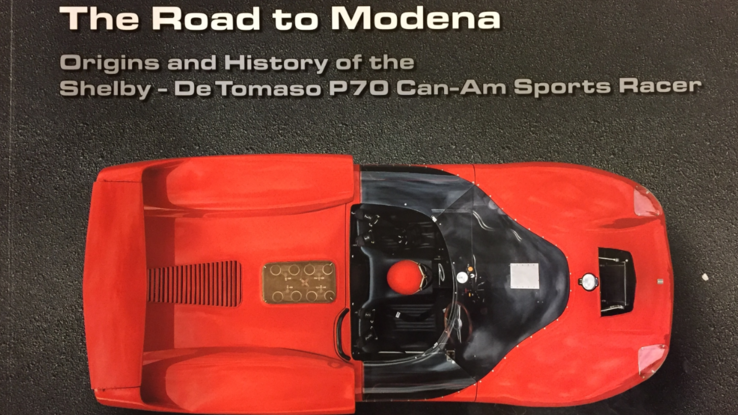 The Road to Modena: Origins and history of the Shelby-DeTomaso P70 Can-Am Sports Racer by Peter Brock

When Pete Brock himself hands you a copy of his latest book to read, you read it. Thus, at the Art Center College of Design’s annual Car Classic, I saw not only the book but the car it was about. Both were stunning. The car looks beautiful even today, 50 years after it was created. You might not have heard of it because it never ran a lap in a race. Blame the gigantic egos of Carroll Shelby and Alejandro de Tomaso. Had they gotten couples counseling and been able to work things out, the P70 would have taken its place among the Lolas, Coopers, Brabhams, McLarens and Chaparrals of its day. This is the story of what happened. Buy it here.

Classic Car Auction Yearbook 2017-2018 by Adolfo Orsi and Raffaele Gazzi This annual publication started 25 years ago and rounds up the global auction action from Sept. 1 to Aug. 31. Total sales of classic cars in that time topped $1.2 billion (or 1 billion Euros or 900 million English pounds). Leading the world by far are U.S. auction sales at $764 million (the UK is a far-distant second at $148 million so, USA! USA! USA!). Such are the stats you get with this stat-dense book. Look up your favorite model and see what it went for: A Lancia Appia topped $8000 at Bonhams Goodwood sale. So there’s hope for us all. Buy the book here.

Other books we haven’t read but which look promising enough that we’ll list them anyway:

Car Stories: Down the Road and Back by David Fetherston is a collection of auto-related tales by this lifetime automotive writer and publisher, gathered from years of driving in Australia, New Zealand, Europe, Asia and the U.S.A. over the last 50 years. Buy it here.

Legacy of Justice: An American Family Story is about the Justice Brothers, Ed, Zeke and Gus, and the lubricant company of the same name that sponsors race cars around the world.

Stardust International Raceway: Motorsports Meet the Mob in Vegas, 1965-1971 Who knew there was this competent road course and drag strip out in Vegas 50 years ago?

Goldenrod: The Resurrection of America’s Speed King is the story of the restoration of the famous land speed race car built by the Summers brothers to set the wheel-driven land speed record that would not be broken for 25 years.

So there, saved you a bunch of shopping. Merry Christmas!