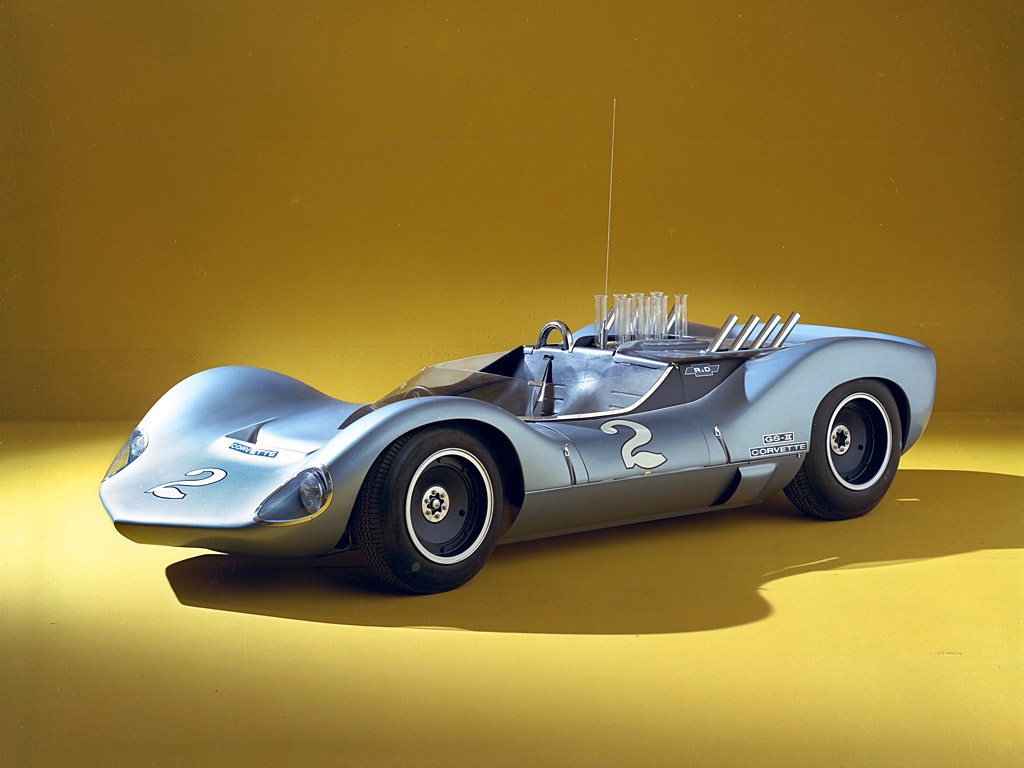 This will mark the first appearance of the one-off experimental 1964 GS IIB outside the Chaparral Gallery of the Petroleum Museum in Midland, Texas.

Applying the name Corvette to the nose and flanks of the GS II likely disguised GM Chief Engineer Frank Winchell’s ambitions to create a state-of-the-art Chevy-powered prototype race car and successor to the Corvette Grand Sport.

The 1960s were years of revolution in motorsport. Engines moved behind the driver. Wide tires replaced the skinny high-profile rubber that had been Formula 1 and sports car orthodoxy. 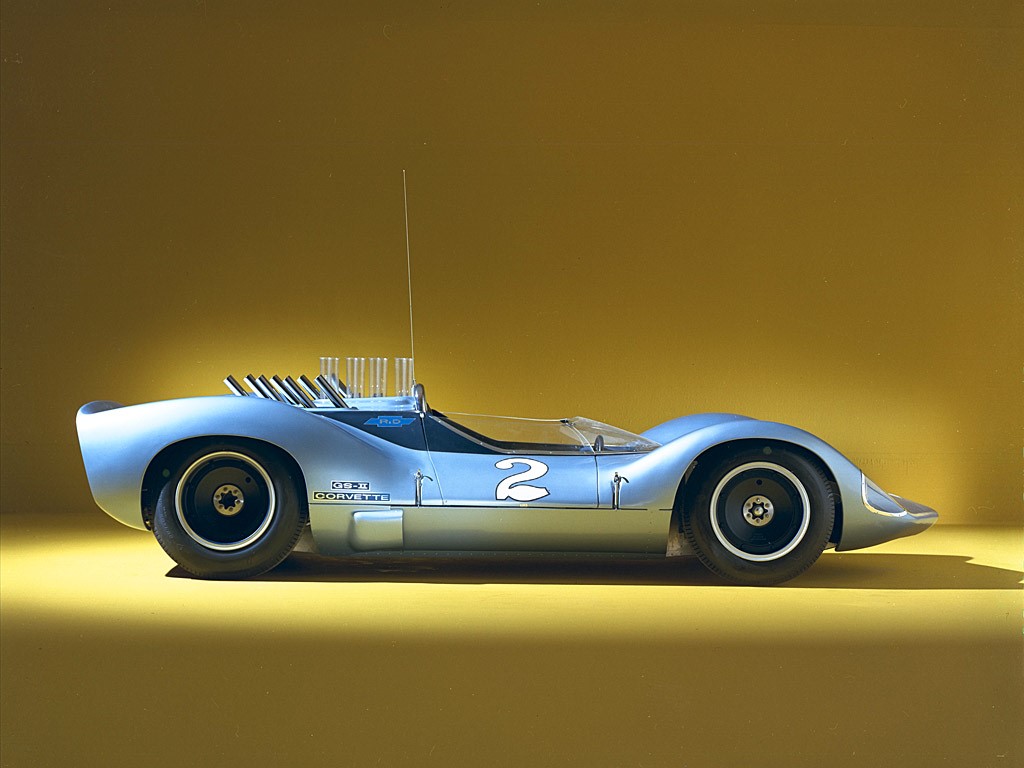 Aerodynamics practically became a religion. And no one was more in tune with the new rhythms of race car design than Cal Tech engineering graduate, Chaparral creator and Rattlesnake Raceway owner Jim Hall. He opened his doors to Winchell & Co.

In the wake of the American Manufacturer’s Association ban on direct factory racing participation, companies like Chevrolet were limited to creating research vehicles and assisting private teams. That’s precisely where the GS II fit perfectly.

The GS II was based loosely on Chevy’s Monza GT concept car that used Corvair running gear in Chevrolet’s first monocoque design. But unlike the Monza GT, the GS II took the theme several steps further by using thin-gauge steel and an experimental all-aluminum 327 V8 engine that was mated to a bespoke single-speed automatic transmission. 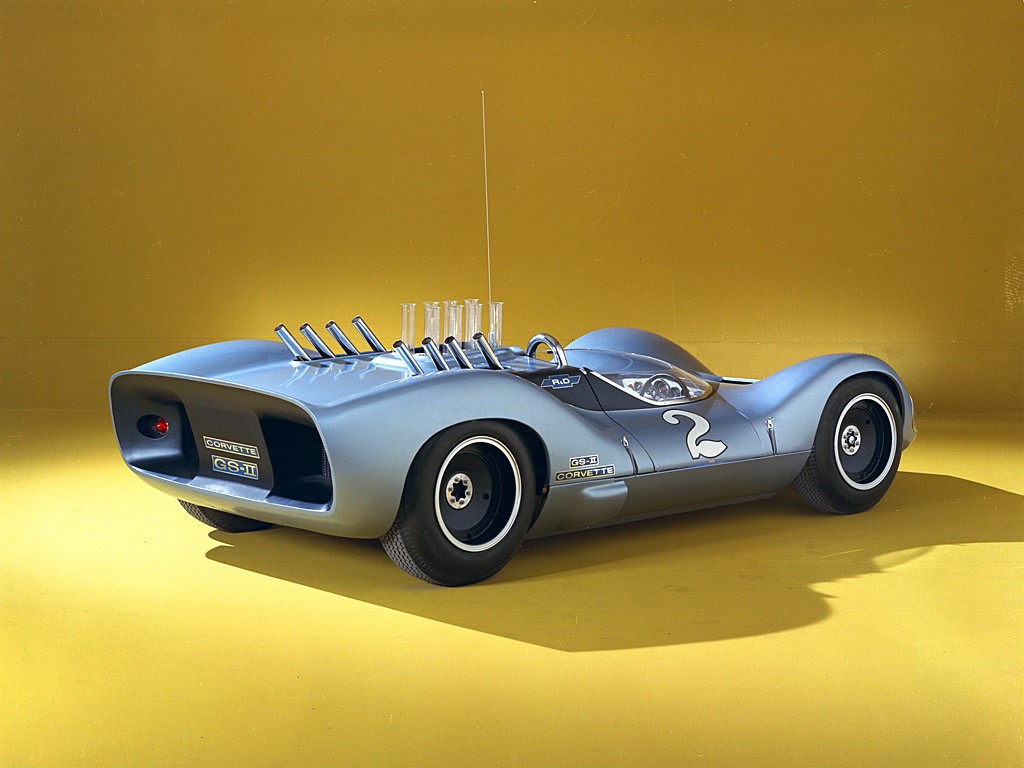 In the years that the Corvette Sting Ray was the latest design, the GS II was a bolt of engineering lightning created by an all-star squad: Larry Shinoda designed the GS II’s svelte body. The radical single-speed automatic transmission was developed by Chevy’s Jerry Mrlik. It was a confluence of the latest thinking and it looked and acted the part.

In 1964, after a brief testing period, the GS II was returned to Michigan and destroyed. An updated GS IIB was then built. The monocoque chassis was riveted and bonded together using .032″ sheet aluminum. The body was revised to accommodate wider tires.

GS IIB was then shipped to Midland where it underwent extensive testing. The Amelia’s 2003 honoree, Jim Hall, was behind the wheel for the majority of the GS IIB’s high-speed runs.

“The Mid-Engine Corvette Class is a dream class,” said Bill Warner, founder and Chairman of the Amelia Island Concours. “Having a historically significant car at The Amelia that’s never been seen in a concours before is a dream for us. Thanks to Chaparral and the Petroleum Museum that dream has come true.”

The GS IIB will join the CERV I, CERV II, Corvette XP-819, XP-895, XP-897 GT, Aerovette, CERV III and the Indy Corvette on the Amelia Concours’ Silver Anniversary field on March 8, 2020 for an unprecedented Corvette reunion to celebrate the arrival of the mid-engine C8.