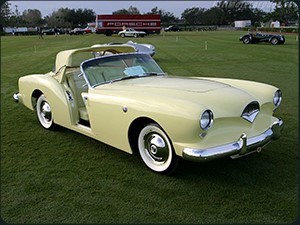 Norwalk, Conn. From the collection of the late Malcolm Pray, a rare 1954 Kaiser Darrin sports car will be featured at the 4th Annual Father’s Day Car Show at Matthews Park in Norwalk on Sunday June 17th from 10am to 3pm.

The Kaiser Darrin, also known as the DKF 161 or in short as the Darrin, was an American sports car designed by Howard “Dutch” Darrin and built by Kaiser Motors in 1954. Essentially a revamp of Kaiser’s Henry J compact, the Kaiser Darrin was one of its designer’s final achievements and was noted for being the first American car equipped with a fiberglass body and doors that slid on tracks into the front fender wells. The car was named both for Henry J. Kaiser, head of Kaiser Motors, and Darrin.

The Darrin was conceived as part of a movement in Detroit to compete head-to-head with European roadsters being imported to and sold in the United States in the post–World War II period. Among other products developed were the Ford Thunderbird in its initial two-seat form and Chevrolet Corvette. While the Darrin was designed attractively, it was also underpowered and, while a good performer overall, did not measure up to foreign vehicles such as the Nash-Healey or Triumph TR2. The Darrin’s high price tag, lack of consumer confidence in Kaiser’s viability and practical challenges with the car’s design resulted in low sales, though sports cars at the time were generally not fast sellers.

Only 435 production Darrin’s and six prototypes were built. Crumbling corporate finances, pending loss of assembly facilities and a freak snowstorm that reportedly ruined 50 of the cars all conspired to terminate the program. Darrin bought those 50 vehicles and whatever others Kaiser had left in storage and sold those from his Hollywood, California showroom. Many of the cars’ engines were retrofitted with superchargers and multiple carburation to improve performance. Six were re-engined with Cadillac Eldorado V-8 units; one of these was reportedly raced. 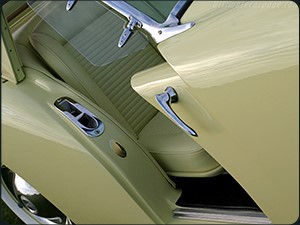 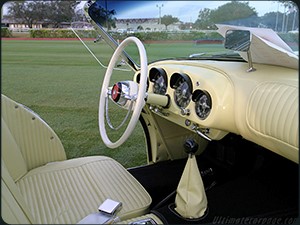 Along with Darrin’s trademark fender line, the Kaiser Darrin had entry doors that, instead of being hinged to open outward, slid on tracks into the front fender wells behind the front wheels. Fueled by Darrin’s dislike for conventional doors, the designer had taken out a patent on the sliding auto door concept in 1946. To keep the door assembly as simple as possible, no side windows were built into them. The car was equipped with a three-position Landau top, which was also considered novel, and the design on the whole considered by industry critics and writers as beautifully proportioned. The only flaw was considered the car’s front grille. High and shell-shaped, it looked as though the automobile “wanted to give you a kiss,” as one writer commented. 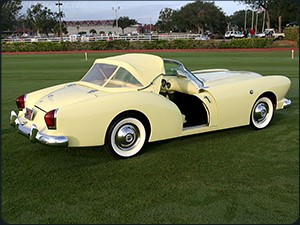