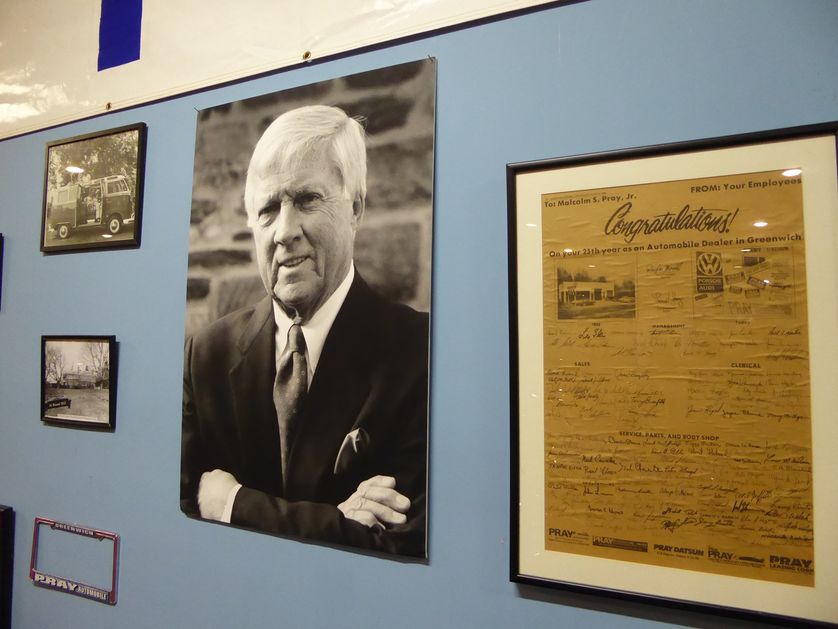 Greenwich, Conn. – I never met Malcolm Pray, but I’ve been in his living room. Pray, a major Connecticut auto dealer and collector built a huge garage for his dozens of cars and brought in duplicates of his living room couches and chairs so he could hang out comfortably among his Delahayes and vintage BMWs.

Wealthy Greenwich, you may have heard, is a major car town, where Tesla Model S’s dice with Maserati Ghiblis on the main street (with white-gloved cops replacing the traffic lights). Ralph Lauren keeps his cars near here, and that world-class collection is close to a major storage facility for high-end collectibles such as Enzo Ferraris. Miller Motorcars, located downtown, is a dealer for Bugatti, Bentley, McLaren and Aston Martin.

Ferrari, by the way, opened its first U.S. distributor in town, capably helmed by famous ex-racing driver Luigi Chinetti. And don’t forget the Greenwich Concours d’Elegance, established by the late Bruce Wennerstrom and still one of America’s pre-eminent auto events. Malcolm Pray, who died in 2013, fit comfortably into that world, regularly winning prizes for his cars, including the personal-favorite 1937 Delahaye 135M Roadster he’d been charmed by at the 1939 New York World’s Fair.

Pray, a major Republican fundraiser when he wasn’t buying and selling cars (Mitt Romney shows up in a lot of photos), could have settled into a comfortable retirement with his family and cars after he sold his six dealerships in 2001. But he didn’t. Instead, he turned the two adjoining car barns (just over the border from Greenwich in Bedford, New York) into the Malcolm Pray Achievement Center. 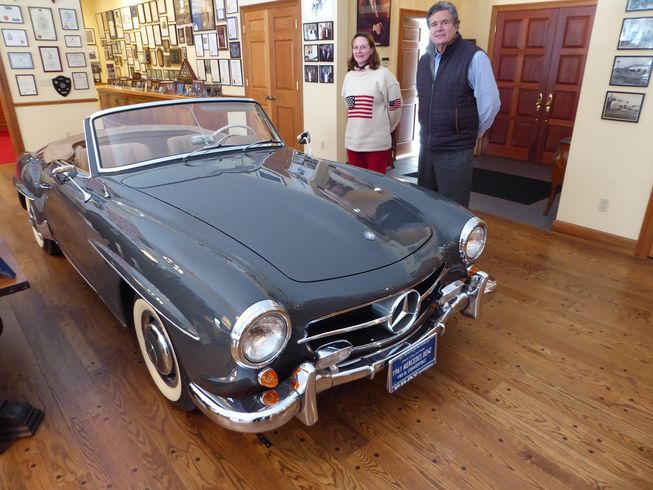 The center’s mission is inspiring kids, mostly from poor backgrounds, to succeed in life the way he did. “There’s nothing in life you can’t achieve,” said Pray, who made a point of greeting each kid individually. “Your reputation is the greatest asset you have.” Needless to say, Pray taught the value of a firm handshake. Some 600 kids visited the first year, in 1999, and 7,000 since then.

It turns out that Pray had, if not exactly a rags-to-riches story, certainly one about the most unlikely to succeed. No star student in high school, he also failed to distinguish himself at the University of Virginia. Back in Greenwich, he took a job at modest Morlee Motors (the local Fiat dealer) in 1955. And as Marikay Satryano, a three-tour Iraq War veteran and the achievement center’s executive director, describes it, it was there that Pray finally found what he was good at – selling cars. 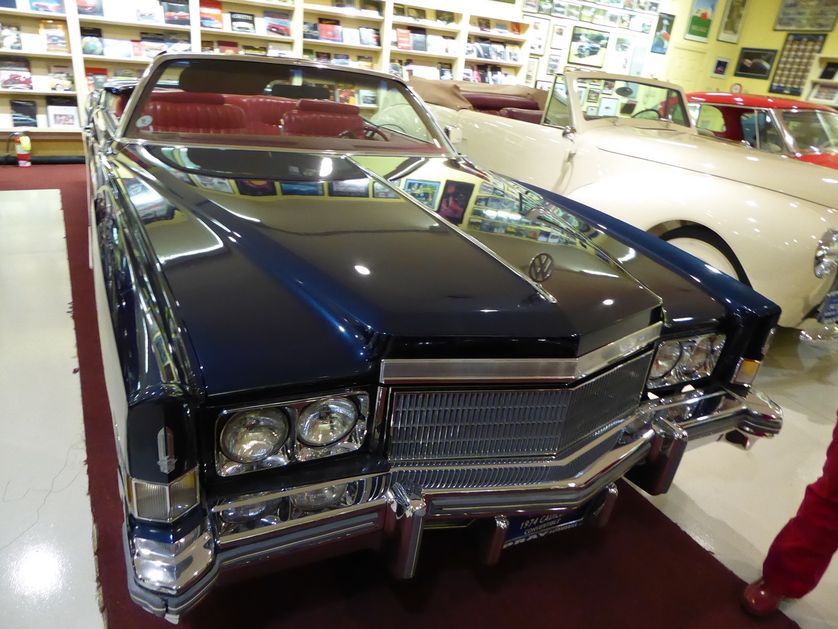 Pray loved this 1974 Cadillac Eldorado convertible, which wears a VW emblem in honor of his day job
(Photo: Jim Motavalli)

In two years, Malcolm Pray was the top salesman, and soon after bought the dealership, which became the basis on which was built his very successful Volkswagen/Audi/Porsche auto empire. That experience made a deep impression, and Pray gave the young entrepreneurs such lessons as “Sometimes a hobby can turn into a career,” “Not all millionaires are involved in big businesses,” “Tell the truth — liars get caught,” and “Don’t waste time in school.” That last one he learned by negative example. 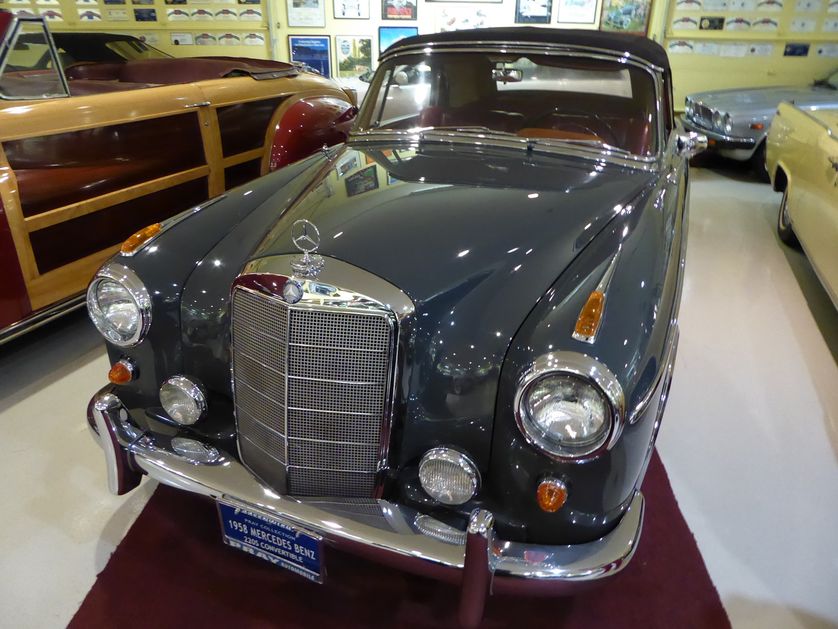 Limited-edition Mercedes-Benz 220S convertible has been zooming up in value. (Photo: Jim Motavalli)

But there was still plenty to see, 45 cars instead of the 70 that were there at one time. An immaculate Mercedes-Benz 190SL (like the one I used to own) sat in the aforementioned living room. The kids made a beeline to the 1942 Army Jeep in the corner, but I admired a brace of MGs, including a rare 1931 Model M with a fabric-covered body.

The oldest car in the collection is a brass-era 1907 Metz, complete with starter handle. It’s used by the center as a lesson. “What kept a car like this from getting stolen back then?” the classes are asked. The correct answer, which some get, is that there were so few cars around back then that if somebody other than the Metz’ owner were seen piloting it, they’d be immediately arrested. 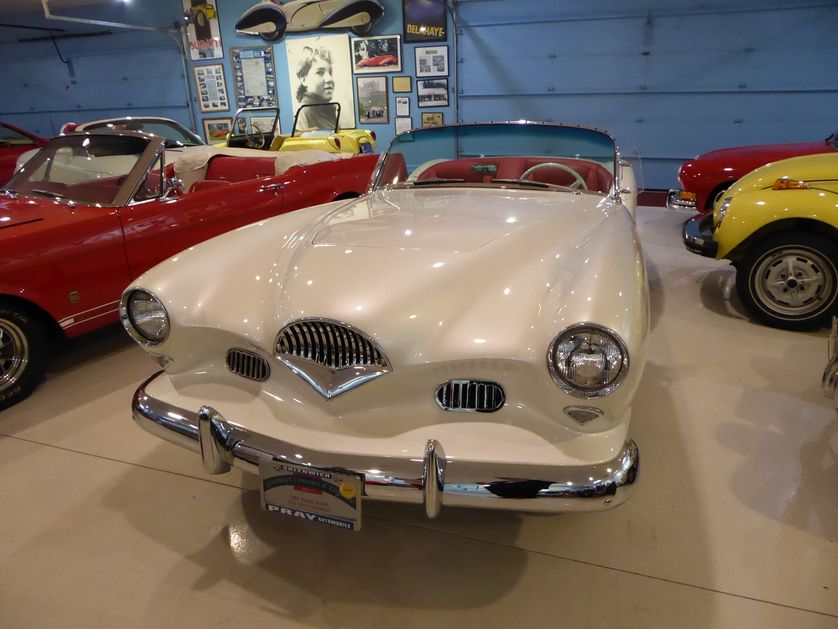 1954 Kaiser Darrin, with fiberglass body and doors that slide into the body (Photo: Jim Motavalli)

Pray frequently posed with his fiberglass-bodied 1954 Kaiser Darrin, which has doors that slide into the bodywork. It’s an extrovert’s car, like the Rat Pack favorite Dual Ghia Pray used to own. More prosaic are the VW Beetle and Karmann Ghia that remind visitors of Pray’s main job — selling Volkswagens.

Aston Martin Lagonda, on loan to the center, was in heavy demand in the Middle East.
(Photo: Jim Motavalli)

An Aston Martin Lagonda looked like it got lost on its way to Dubai. It was on loan, as was a ’53 Lincoln Cosmopolitan convertible (though it looked like Pray’s present to himself when he first made it). A 1996 Bentley convertible, another one Pray used a lot (and drove down to Florida) bore the Connecticut license plate “Y.” (Pray acquired “P” also) 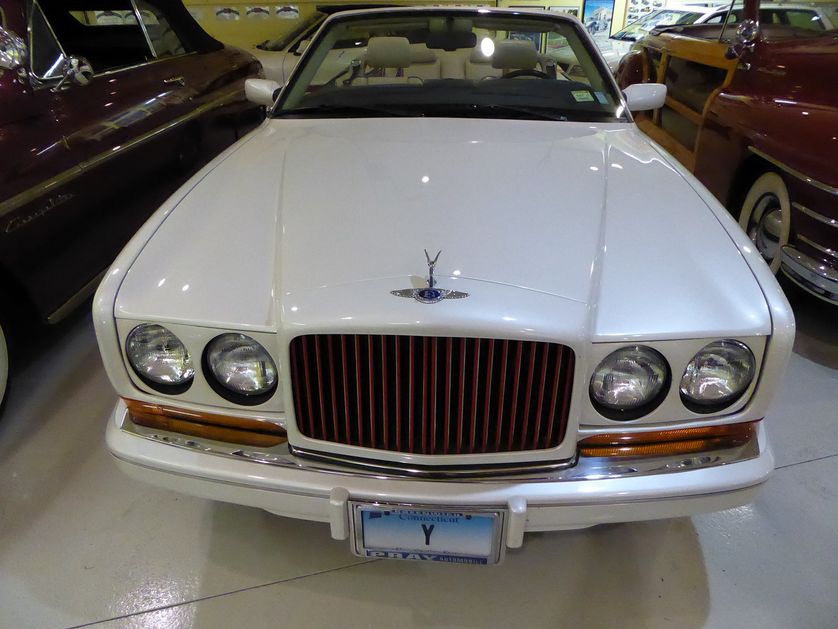 “Mr. Pray loved to drive,” said Jerry Cotrone, who assists with events at the center. “He could have flown down to Florida, but he usually drove one of his cars.” Cotrone has his own Greenwich story – he was the car wash boy at Chinetti Motors while in college, and then became a BMW of North America sales manager.

Look at the lovely wood on this 1946 Chrysler Town and Country convertible. These have also been soaring in value. (Photo: Jim Motavalli)

Other highlights for me include a ’46 Chrysler Town and Country, with gorgeously restored oak and mahogany wood side panels; a four-door 1964 Lincoln Continental convertible; a 1934 V-12 Packard with recreated LeBaron body by a real craftsman; and the dark blue 1974 Cadillac Eldorado that was Mr. Pray’s usual around-town car. After being criticized for not driving a VW like the ones he sold, he had a VW radiator ornament mounted on its mile-long hood.

Satryano says Pray failed at only one thing, getting old. “He never thought it would happen to him,” she said. “Now our goal is to get as many people as possible through those doors, to study the life of an entrepreneur.”

At the center he built, Malcolm Pray lives forever.

A brace of MGs at the Malcolm Pray Achievement Center in Bedford, NY
(Photo: Jim Motavalli)